In 2013, we’re celebrating 25 years of publishing Young Adult and Children’s books in Australia. We’ve been having a great time reminiscing and digging up treasures in our archives and company library… 2013 has also been a HUGE year for author Margo Lanagan.

Her stunning book Sea Hearts, published last year (and known as The Brides of Rollrock Island in some countries), has been acknowledged with two Aurealis Awards, an Indie Award, a Norma K Hemming Award and just last week took the Older Readers Book of the Year award from the CBCA! It’s been Highly Commended at the APA Book Design Awards and Shortlisted in the NSW Premier’s Literary Awards, the Queensland Literary Awards, the WA Premier’s Book Awards and for the Stella Prize and Ditmar Awards. It’s on the Longlist for the UK CILIP Carnegie Medal and the Gold Inkys.

Phew! And it’s only August… we are proud and thrilled!

But this is far from Margo’s first book for A&U. She joined our list with The Best Thing, published in 1995. Going back through catalogues, we found this description of Margo’s writing from 1999: ‘she can make you laugh and think and feel deeply and see things afresh; she writes with subtlety, passion and grace. She says she gets her best ideas while doing the dishes.’

And look, look, look at all these books and cover designs we found filed under ‘L’ in the company library … which of these do you think stand the test of time? 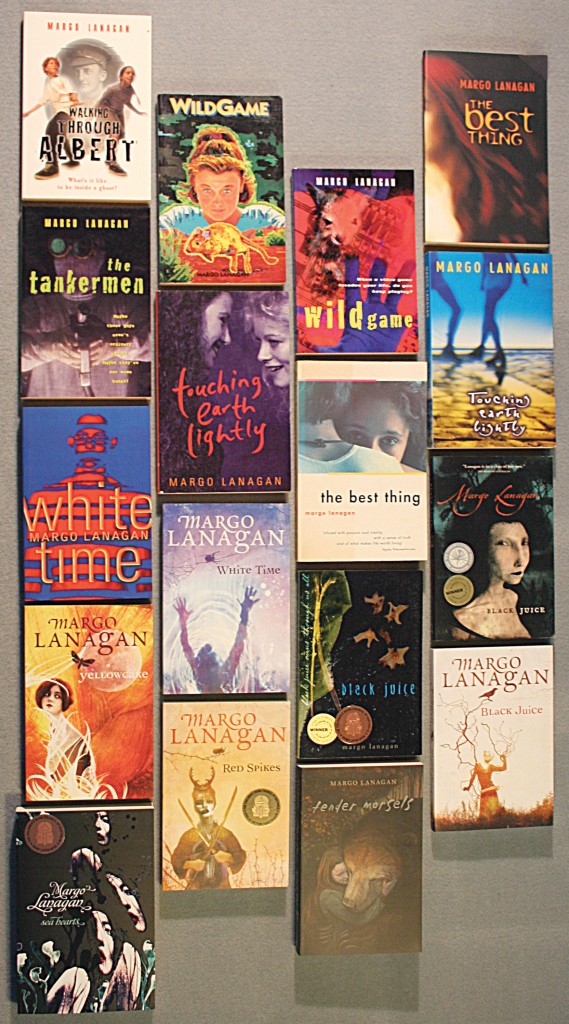 Margo’s work has played another important role at Allen & Unwin. Rosalind Price, the Publisher who founded our YA and children’s list, talks about Margo’s ‘audacious imagination and piercing prose … When we interviewed prospective editors, we asked them to respond to Singing My Sister Down, the first story in Black Juice, as a kind of litmus test of literary judgement and sensibility … this process brought us Jodie Webster, who became an indispensable member of the A&U team.’

Happily, some of Margo’s earlier books, which have been unavailable for a short time, have recently been digitised and can be bought in epub format from various ebook vendors. If you haven’t already, take your pick from above and make sure you check out her books, and follow her exploits on her blog or on Twitter @MargoLanagan