Tonight at last, we can announce the 2014 winner of The Australian/Vogel’s Literary Award, Christine Piper with her debut novel After Darkness.

Here at our offices in Crows Nest, a crowd from across the literary world were in attendance waiting with bated breath for Eleanor Catton to announce our winner.

Picking up $20,000 prize money, and a copy of her new book, winner Christine Piper said when collecting the award:

The Australian/Vogel’s Literary Award is a rare and generous thing, a means for unknown writers, such as I, to have a shot at success.

In many ways, modern Australia is built on immigrant’s tales, and Vogel’s founder Niels, a Danish immigrant, created his own story when he established the award as a way of giving back to his adopted community. So I feel as if I’m adding to the diversity as a half Japanese Australian, born in Korea, now living in New York, who writes about Japanese immigrants.

When I started working on this novel, five years ago, I was still in my twenties, had never published a piece of fiction, yet had an ambitious dream to write a novel from the point of view of a Japanese internee. Now I’m older, wearier, and pushing the middle aged category of writer, yet thanks to this award I’m absolutely looking forward to what lies ahead.

Here’s the cover and blurb: 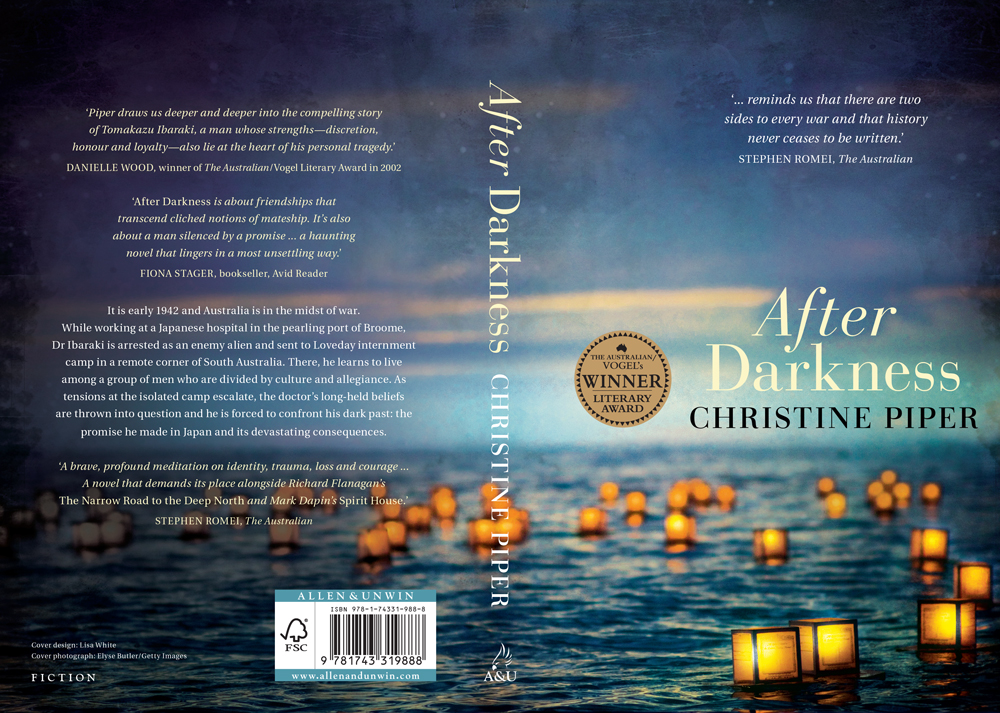 It is early 1942 and Australia is in the midst of war.

While working at a Japanese hospital in the pearling port of Broome, Dr Ibaraki is arrested as an enemy alien and sent to Loveday internment camp in a remote corner of South Australia. There, he learns to live among a group of men divided by culture and allegiance.

As tensions at the isolated camp escalate, the doctor’s long-held beliefs are thrown into question and he is forced to confront his dark past: the promise he made in Japan and its devastating consequences.

Judges’ comments on After Darkness

A brave, profound meditation on identity, trauma, loss and courage… reminds us that there are two sides to every war and that history never ceases to be written… A novel that demands its place alongside Richard Flanagan’s The Narrow Road to the Deep North and Mark Dapin’s Spirit House.

Danielle Wood, winner of The Australian/Vogel’s Literary Award in 2002:

Piper draws us deeper and deeper into the compelling story of Tomakazu Ibaraki, a man whose strengths – discretion, honour and loyalty – also lie at the heart of his personal tragedy.

After Darkness is about friendships that transcend clichéd notions of mateship. It’s also about a man silenced by a promise … a haunting novel that lingers in a most unsettling way.

Our publisher Annette Barlow said of After Darkness:

The judges talked about After Darkness as a novel that resonated strongly with them throughout their Vogel’s reading and beyond. Christine’s writing is thought-provoking, poignant and rewarding.

Christine joins a long list of Australian writing talent who have had their careers launched by the award, and if you are under 35 and want to join her, find out how with the 2015 Australian/Vogel’s Award with entries open until 31 May.

You’ll be able to buy After Darkness in bookshops from tomorrow, or can order online at Booktopia, Bookworld, Dymocks, Readings as well as iBooks and Amazon, and you can read an extract below.

So from all of us at Allen & Unwin, hugest congratulations Christine, now a published author!