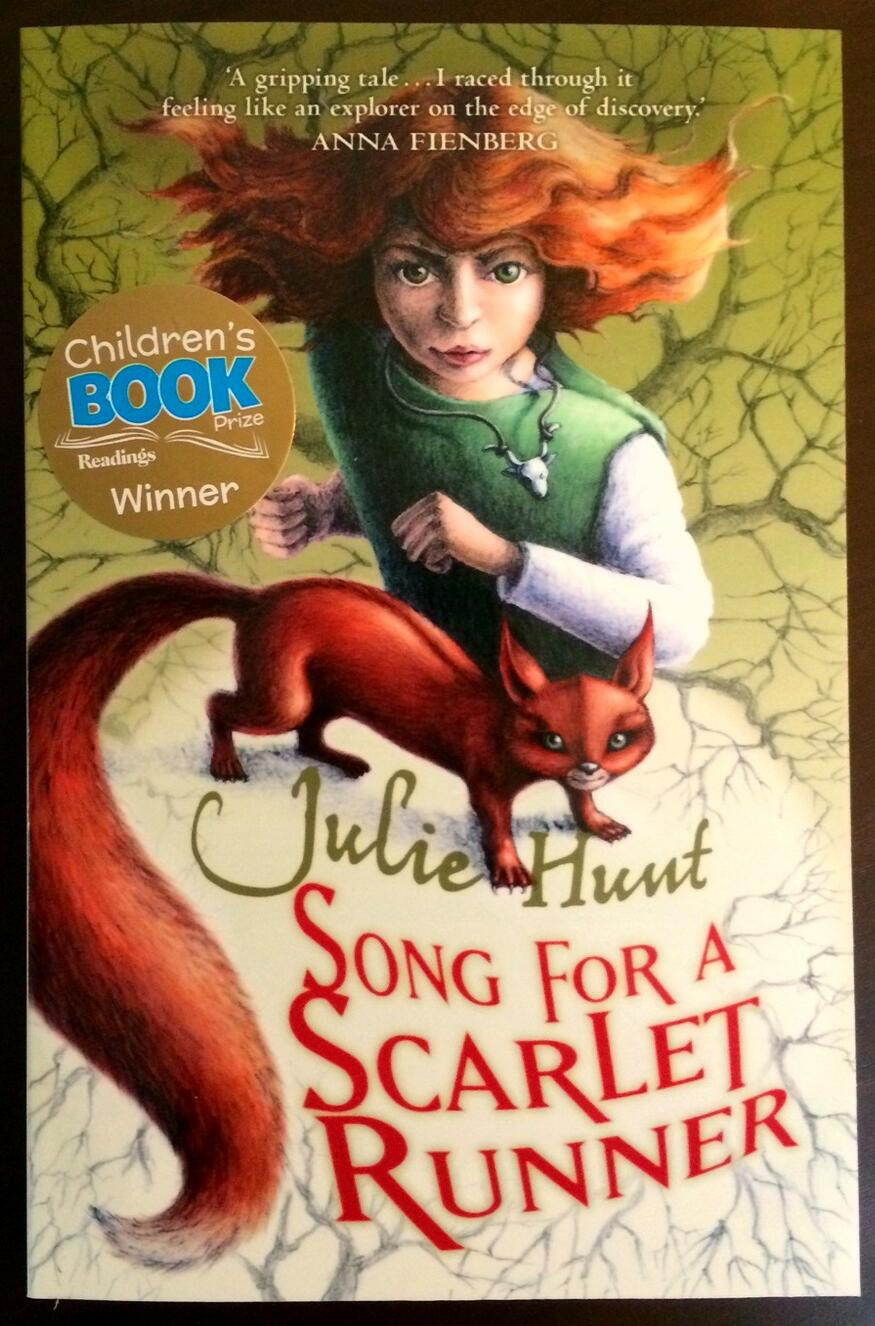 Yay, oh yay, for today the winner of the inaugural Readings Children’s Book Prize was announced and it was our own Julie Hunt who picked up the $4000 prize for her book Song for a Scarlet Runner!

Cue much rejoicing, as this was already a staff favourite, but it also “stole the hearts of every judge on the panel” said Readings, including author Sally Rippin who said:

Reading Song For A Scarlet Runner was like being transported to another world. The language was gorgeous and evocative and the characters so skilfully drawn that if I close my eyes I can still be transported back there, weeks after having put the book down. As an adult reader I loved this novel as an adult, and can only imagine the magical experience of being swept away by a book like this as a child.

You can read more from the judges here, and this is this is what our Elise had to say on it in our feature on Favourite Worlds:

This is just children’s fiction at its best, the world so rich and twisty and snarky and unexpected and real that it seems to exist even beyond the boundaries of the book. I can’t recommend it highly enough – for ages 9-12, but also for anyone of any age who loves classic children’s fantasy such as CS Lewis, Philip Pullman or TH White. Julie was interviewed for the Readings blog, about Song for a Scarlet Runner and her other writing, and shares exciting news of her next books with us, something completely different:

I have two books in the pipeline. The first is a graphic novel called KidGlovz which I am doing with artist Dale Newman. Dale created the beautiful cover illustration for Song for a Scarlet Runner. This book is about a child prodigy, a pianist whose musical gift can best be described as ‘otherworldly’. He wears a pair of white gloves and when he discovers the gloves have a sinister past he begins to realise that his talent is a curse as well as a gift.

KidGlovz will be published next year and I’m writing a sequel which will be a hybrid novel – part graphic novel, part prose. The second story follows the gloves in their next incarnation. They change hands and turn a light-fingered boy, a pickpocket, into a thief who can steal anything – hearts, minds and souls.

Here’s what Sue, Julie’s publisher, had to say about the award:

We greatly appreciate the expertise and dedication of the staff at Readings, for their love of good books and their generosity in introducing them to visitors to their stores. We were thrilled to hear about the Readings Children’s Book Prize, and that Song for a Scarlet Runner was included on the shortlist, but now we’re over the moon!
It has been chosen as the winner! This is a wonderful acknowledgement of Julie Hunt’s storytelling skills, and we’re so proud of Julie, and all the curious and compelling characters in Song for a Scarlet Runner.

We think it is perhaps especially pleasing to win an award in its first year, as judges may be looking that extra bit harder as they know future candidates will be judged against this one, so huge congratulations to Julie Hunt and her wonderful tale, and roll on 2015 for introducing you all to Kid!