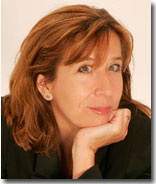 It’s a truism that writers come to their work with different methods. We hear of the writer who plots out moment by moment versus the writer who scribbles random lines down for pages and pages with no idea of where they’re going. I suspect that many writerly habits get cemented early on and become creative talismans.

The early stages of my first novel, The Breaking, came to me while I was on a silent retreat. Alone and without the clutter of other people’s voices, I was able, suddenly, to hear my own creative voice, to see my own visions. That became a creative habit, one that I have never been able to break. Five books later, it is still a creative necessity, carving out periods of time to be alone, in silence, with only the depth and sound of my own imagination for company. But it’s also true that certain novels, certain stories, demand a different process.

, my fifth novel, demanded a new process from me and it demanded new courage. Back in July 2007 when the world was still fresh and Twitter was barely out of nappies (ah, bless, they grow up so quickly…) I began a novel about a woman who sets off on a mercy mission to a city destroyed by a flood. Scathingly satirical, much of the novel came quickly and was a joy to write. It was funny. I was loving writing with humour. In 2009, I read a report of some events that occurred in Memorial Hospital, New Orleans, in the aftermath of Hurricane Katrina. Strained by the disaster, hospital staff had to make a series of life-and-death extreme ethical decisions, effectively deciding who to save and who to leave behind. The report haunted me, it entered my dreams, my waking moments. I found myself thinking about the people in that hospital, the terrible decisions that staff had to make, the value calls on human life. Suddenly my story of a road trip to a flood didn’t feel so funny.

Towards the end of the novel, a small moment in a hospital appeared – clearly the result of my months of being haunted by the story of Memorial Hospital. With the arrival of that scene came a troubling thought, batted away with some determination:this is where the heart of the novel is. I knew it was true; I knew that in that scene I had touched the truth of the story, had uncovered the reason that I needed to write this particular novel. But I knew what it would mean, to pay attention to that determined, whispering, thought. It would mean throwing out more than half of the novel and writing a whole new story, leading to that scene in the hospital. It would take creative courage in quantities I wasn’t sure I possessed.

Believe me, I fought pretty hard. I was tired, I didn’t want to begin again. But each night when I drifted off to sleep, I could hear the whispering voices of those people in the hospital. Characters began to take shape in the dusky shadows of my waking dreams as well as my sleeping ones. Eventually, I set off with my laptop to another fortnight of space, solitude and silence and by the time I came back, those shadowy figures had grown into life on the page. The fight was over: the novel had won.

Kathryn Heyman is a director of the Faber Writing Academy at Allen & Unwin and in October, alongside Fight Club producer Ross Grayson Bell, leads the writing course Start Your Novel in a Week. This course allows you to do just that, arrive with an idea and leave with the opening pages and inspiration for a novel.

this book is not just about struggling to keep your head above water: it’s also about hope and cleansing – and it’s a cracking good read.

Stella Clarke in the Australian:

Not post-apocalyptic but postdiluvian; not tomorrow but today; not bleak but certainly uncomfortable, Sydney writer Kathryn Heyman’s fifth novel has a parable-like quality reminiscent of Cormac McCarthy’s The Road. This novel taps into contemporary qualms that bloom with every report of unprecedented disaster. Is the line that separates our technologically evolved existence from dystopic social collapse really much thinner than we imagine?