Australians are obsessed with ‘boat people’. Despite being a nation built by refugees who arrived on the isolated continent on an armada of flotation devices, in recent years the national discourse has taken a decidedly unsympathetic approach to others hoping to achieve the same feat. Every time I turned on the news, politicians were raging at the invasion of Australian shores by leaky boats filled with desperate refugees.

Despite Northam being far from the coastline, its townspeople were engaged in this national problem because the detention centre had been built on its outskirts. When it was opened for refugee processing, many people in town were enraged, demanding to know why their lives were being put at risk.

During the town council meeting when the detention centre was announced, one man with missing teeth and a mullet raged into the microphone, ‘If one of those people escapes, they’re going to steal my car, they’re going to attack my wife and they’re going to drive down to Perth to blend in with their kind.’ Northam residents, like the rest of the country, had been whipped into a state of hysteria by the continued insistence by politicians that ‘boat people’ were not to be trusted and that Australians had reasons to fear them.

Even though I’d flown to Australia on a valid work visa, I couldn’t help but be sympathetic towards those attempting to reach the country by boat. Many of them came from Pakistan, and many of those were Shias persecuted for their belief by the Taliban and by an indifferent government; their families had been killed, their jobs taken from them and they faced the very real risk of being extinguished by brutal violence. They had escaped from Pakistan to neighbouring countries, which were just as intolerant of their existence. Then, with diminishing options for survival, they had paid people smugglers to take them on boats to Australia, which had previously signed the UN Refugee Convention (apparently only because all the cool countries had been doing it, and you got a free key ring and baseball cap).

Australians’ insistence that arriving by boat is illegal, even though there is no law to this effect, shows that they don’t appreciate how many years it takes to receive a simple work visa, even when all the required paperwork is completed in a timely fashion. Refugees who tried to gain entry through the formal process were looking at a wait of more than a decade. And it was not as though there were that many attempting to come. Australian politicians seemed to be describing a horizon blackened by an armada of boats, whereas in truth hardly any of the world’s millions of refugees chose Australia as their destination.

‘Boat people’ were vilified in the public discourse as threats to national safety, every one supposedly a potential terrorist. The rhetoric which began to escalate under Prime Minister Kevin Rudd – who had returned to power in a coup, which as a Pakistani I almost respected – peaked when Tony Abbott was elected. He called the refugees ‘queue jumpers’ as though there were orderly lines of patient asylum seekers forming outside the borders of Australia. Perhaps it never occurred to him that if those lines did indeed exist, they would be forming in the ocean and the people in them would have to be standing on boats, since Australia is an island. The Abbott government’s hatred of asylum seekers was brought to the fore by the shockingly cruel tactics of Scott Morrison, the immigration minister. Shortly after his appointment, Morrison militarised Australia’s protection against the scourge of desperate refugees, sending many of them back to be killed by their persecutors. Those he couldn’t return right away he exiled to offshore detention centres in Nauru and on Manus Island, criticised by the United Nations as being little more than tent cities devoid of basic resources. When confronted with pleas to his sense of humanity, Scott Morrison responded with a justification based so utterly on principles of efficiency that it isn’t hard to imagine that in a different time and place, he would be the man who took pride in sending the trains off full and having them return empty, on time, every time.

Angry over the treatment of people whom, in slightly altered circumstances, I could have been one of, I did the only thing I knew how to do – I talked about it as a comedian.

The first time I commented publicly on the issue of boat people, it was on stage at a comedy club. I was just trying to articulate how ridiculous I found the reaction, and attempting to explain exactly who these refugees were. I quoted the man who had been so worried about his car and wife, and then tried to convey the truth about the boat people.

‘These are the good guys,’ I said, ‘escaping shitty countries where the bad guys won. It’s not as though if Seal Team Six hadn’t killed Osama bin Laden he’d be in Bakers Hill stealing meat pies. It’s not a concern. These people risking their lives to get here by boat, they’re doctors (like Munjed Al Muderis) and lawyers and teachers and dentists. So when the man screamed, “What if they escape? What am I supposed to do?” I thought, “I don’t know – invite them in. They might teach you how to read and fix your fucking teeth.”

The first time I did that joke, I expected the audience to heckle me with all the clichéd xenophobia their elected officials kept parroting on TV. Instead, the room laughed and applauded. Emboldened, I continued.

Eventually I developed over twenty minutes of material in which I attempted to debunk the insulting myths around boat people and refugees and tried to show how the political leaders were outright lying in an attempt to frighten voters. I performed it in bars in Perth and Fremantle, a comedy club in the remote mining town of Kalgoorlie and even in the beach town of Geraldton, a week after a refugee-laden boat washed up on the shore there, giving locals a fright. Each time, I was met with agreement, shown by applause.

Australians, I realised, were being done a disservice by their political representatives. Once the inhumanity of the government’s propaganda was explained to them, they responded with compassion. Despite my fears, not once did anyone heckle me or tell me to get out of the country if I didn’t like it. People can always surprise you, even when it is you who is setting out to surprise them.

It was this part of my act that was eventually quoted by The West Australian Sunday paper, published under the headline a pakistani migrant walks into town on the very day I decided to test the flight capabilities of my tiny car. The one quibble I have with the reporter who interviewed me after watching my show is that she didn’t clearly differentiate between what I said on stage and what I said over the phone.

‘If you’re worried that someone who spent two weeks on a boat, lost half his family on the trip over, then spent two years in Nauru and can’t speak the language can take your job away from you, then be better at your fucking job,’ when appended with ‘he said on stage to laughter’ makes me sound less sociopathic than when it ends with a simple ‘he said’.

I didn’t help things by exaggerating my feelings towards Northam for comedic effect, describing it as a ‘social and cultural black hole’.

When I got home from the car crash, I woke Ishma and told her what had happened, assuring her that I was fine, though we were lacking any conveyance until I got the insurance sorted.

‘Oh and my interview came out in the newspaper,’ I told her. ‘Grab it in the morning if you get a chance.’ Then I showered the crushed glass out of my hair and ears, and went to sleep.

The next morning Ishma went for her pre-dawn run. Making her way down to the petrol station, she bought a copy of the newspaper and held it up to everyone in the store, proudly proclaiming, ‘My husband is in this!’

‘We’ll read it for sure!’ said the cheery woman behind the counter. Then Ishma ran home, spread it out on the breakfast table and began to read it herself.

‘They’re going to chase us out of town!’ she lamented when I woke up and read it as well. Less than a year after arriving, I had insulted Northam and attacked Australian governmental policy in print. My photograph over the interview destroyed my last shred of anonymity.

For the next few days, we worried about the reaction. From friends we heard that the people of Northam were incensed and my mailbox would be flooded with people contesting my views on refugee policies and pointing out that grateful immigrants should be quiet immigrants. That I could expect the same mix of cursing and threats of violence I hadn’t received for a long time – not since I stopped writing my weekly columns in Pakistan.

I wondered if anyone would attack us physically and if Anya was safe at school. But when I shared these fears with one of our local friends, he just laughed and said, ‘This is Australia, mate. When we get angry, we grumble over a few beers and then go home. No one’s going to attack you guys.’

And no one did. A few people glared when they saw me at the grocery store, but that was the extent of the reaction. The only person ever to talk to me about it was an old man who caught up to me outside the local post office.

‘Are you that Pakistani fella that said 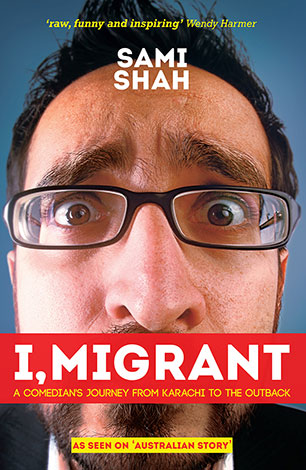 Northam had no culture?’ he snarled. I couldn’t help noticing that, despite his age, his knuckles looked flat and hard.

‘Well good on ya! I’ve lived here my entire life and Northam is a shithole!’ he said. Then he walked off, laughing to himself.

There is a sense of humour inherent in the Australian psyche; it’s not as cynical as the Pakistani one, but it’s just as willing to laugh at itself.

This is an edited extract from Sami Shah’s memoir I, Migrant: A comedian’s journey from Karachi to the outback.

Sami Shah on the power of comedy:

Sami has recorded a Ted X talk on the power of comedy, and the human connection it can bring, which you can view below, and you can also read his piece for Amnesty Australia on Staying positive in these uncertain times.