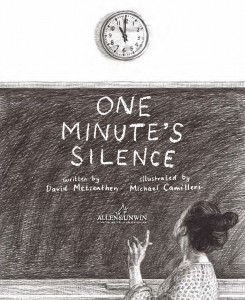 I’ve never been a huge fan of Anzac Day. By its very name, it suggests the celebration or commemoration of the Anzacs alone – Australians and New Zealanders who fought in World War I. I realise it’s grown to mean much more than that, but personally I’ve always preferred the less flashy but more inclusive Remembrance Day.

There’s such beauty in the red poppies (though fewer and fewer poppy sellers every November); there’s mystery in the sun landing on the word ‘LOVE’ on the Stone of Remembrance at the Melbourne Shrine; and, for someone who works with words, there’s the deeply satisfying symmetry of it all occurring ‘on the eleventh hour of the eleventh day of the eleventh month’.

When author David Metzenthen first sent me the text of what became One Minute’s Silence, it sent shivers up my spine. And it was Remembrance Day I thought of – despite the poem being set at Gallipoli – because he had shown us both sides of the conflict, from the point of view of the Anzacs and the Turks.

In one minute’s silence……
you can imagine the grinding in your guts as the ironbark bows of the Australian boats bumped the stony shore of Gallipoli on the twenty-fifth of April, 1915…
when twelve thousand wild colonial boys dashed across the shivering Turkish sand in the pale light of a dairy farmer’s dawn lashed with flying lead.

But can you imagine, in one minute’s silence, lines of young Turkish soldiers from distant villages, hearts hammering, standing shoulder-to-shoulder in trenches cut like wounds… firing on the strangers wading through the shallows, intent on streaming into the homeland of the Turkish people.

When I saw illustrator Michael Camilleri’s early roughs for the illustrations, the shivers increased – and I knew we would be publishing something very special. 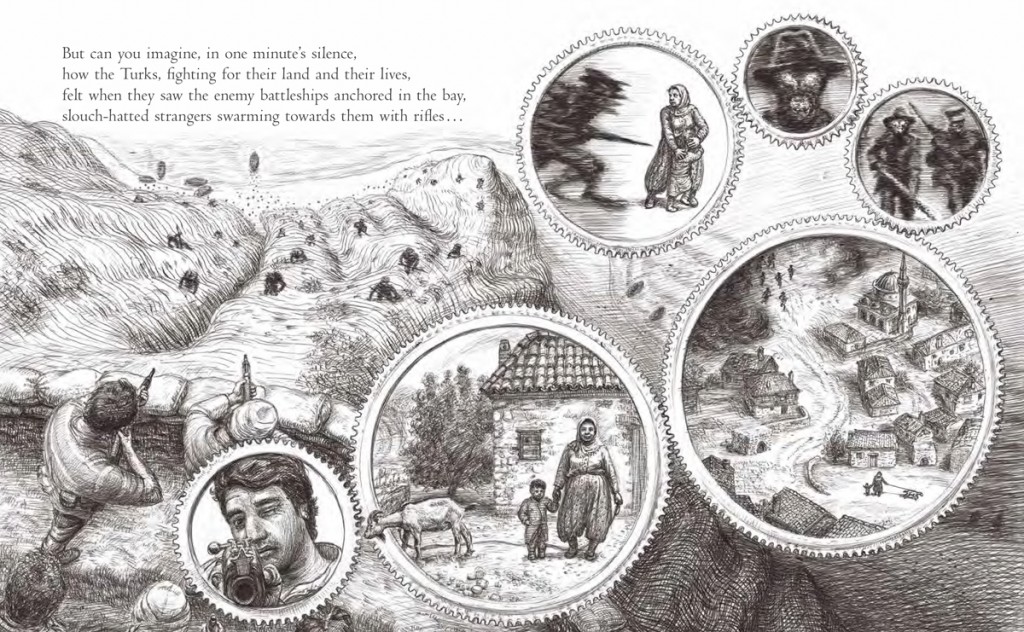 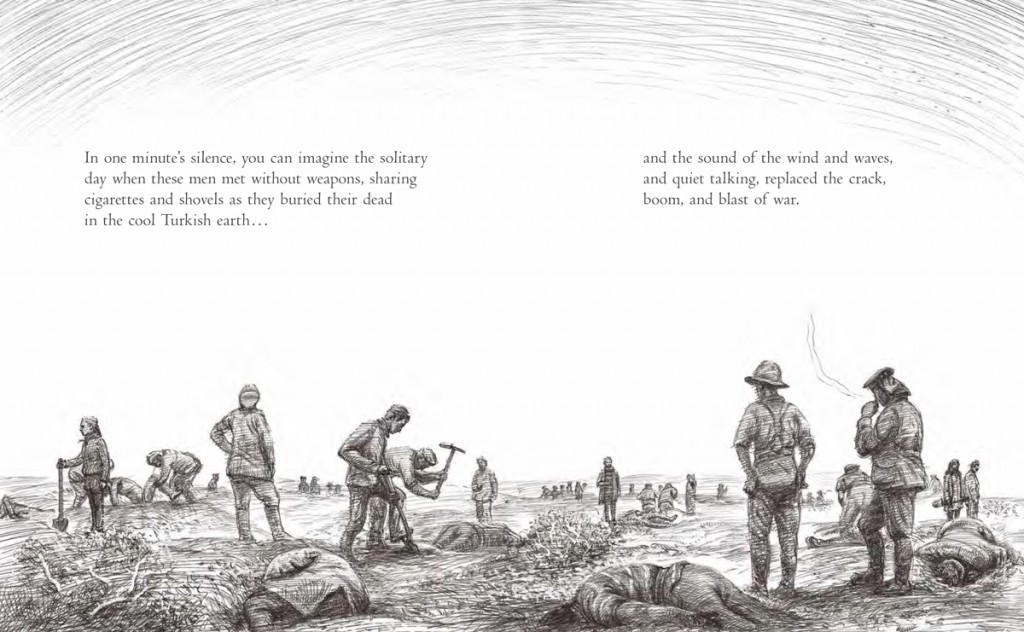 By depicting a class of schoolchildren observing ‘one minute of silence’ and imagining themselves into the conflict, Michael has invited young readers to consider all sides of the iconic battle at Gallipoli. It could be Anzac Day. It could be Remembrance Day. But for me, it’s about remembering everyone – all those men and women, of all races and creeds, who have died or suffered in all wars and peacemaking operations. 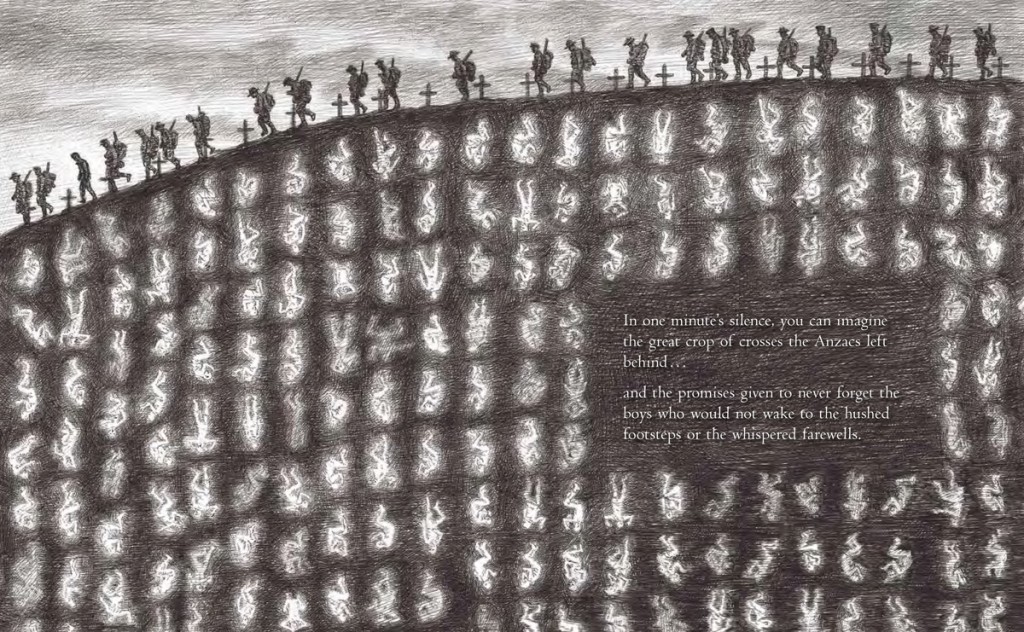 Buy a red poppy this Remembrance Day. And remember everyone that war has touched. 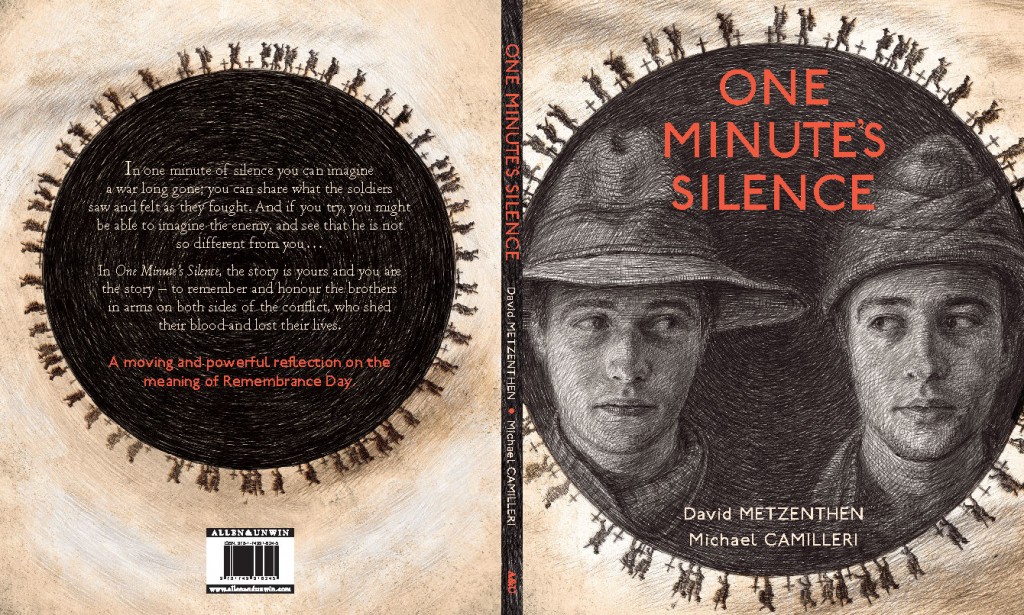 Read an interview with David Metzenthen explaining how he went from idea to picture book, and some great reviews linked below, you’ll also find teacher notes and an in depth explanation of the artwork from the illustrator over on our website:

The text in this book is minimal but searching, and the illustrations are outstanding.

It is an impressive sophisticated picture book with beautiful illustrations, evocative language and insight into the terrible time known as the Gallipoli campaign. I shared this book with my book club children; a group of 10 and 11 year olds who were mesmerized. The discussions generated were amazing.
Book Trailers for Kids & YA blog

One Minute’s Silence is a wonderful tribute to the soldiers who fought and died at Gallipoli and an important reminder of the humanity of the soldiers of both sides of the conflict…  puts a very human face on what can become a dry historical event for children and teens.
Kids’ Book Review 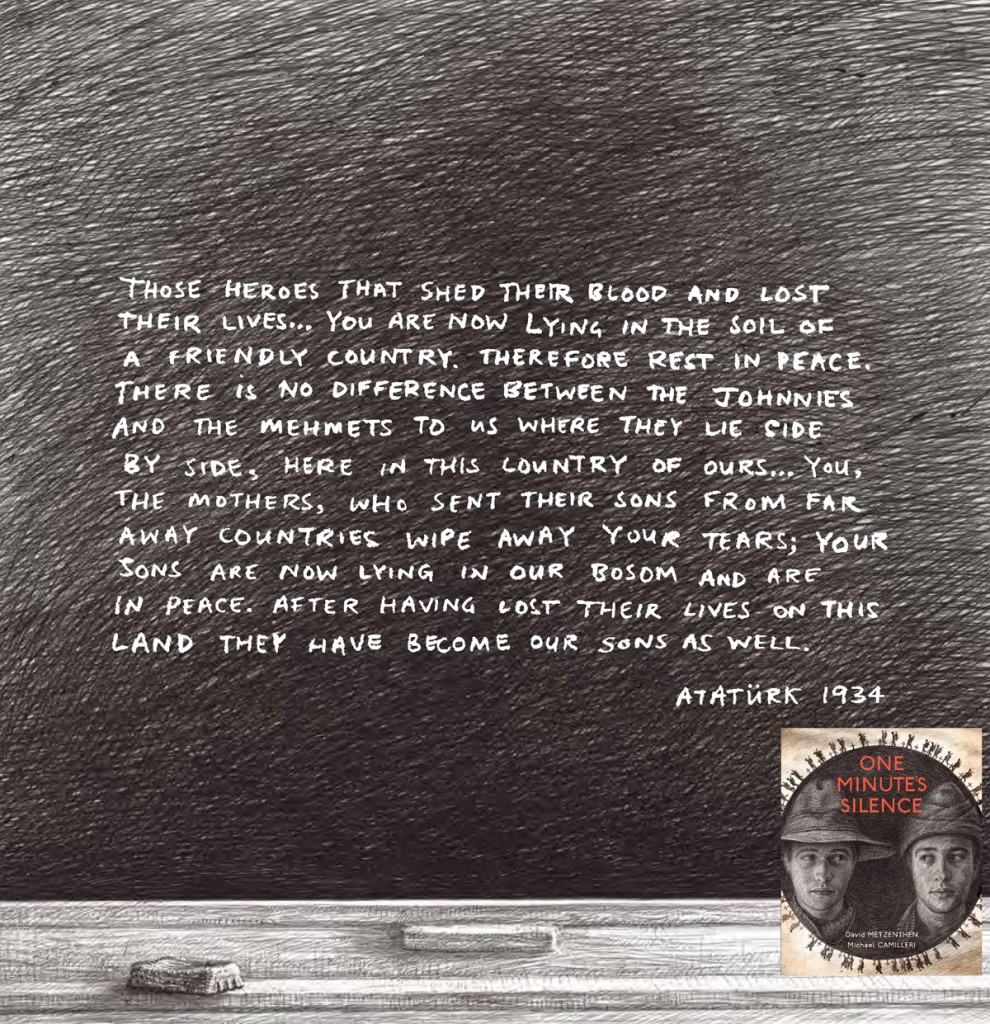