Entries are now open for the 2016 The Australian/Vogel’s Literary Award – one of the country’s richest and most prestigious awards for an unpublished manuscript – which turns thirty-five this year! In that time The Vogel’s award has launched the careers of many notable authors including Tim Winton, Kate Grenville, Gillian Mears, Brian Castro, Mandy Sayer and Andrew McGahan.

The award offers publication by Allen & Unwin, with an advance against royalties, along with prize money totalling $20,000. Last year’s winning novel After Darkness went on to be shortlisted for the Readings Australia New Writing Award and the Indie Book Award for Best Debut. 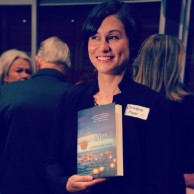 Winning The Australian/Vogel’s Literary Award brought a multitude of blessings, a Booker Prize winner launched my novel, I was interviewed on television and my book was reviewed in national newspapers and I even got a nod from Jennifer Byrne on The Book Club.

The $20,000 prize allowed me to pay off my debts and start my next project with a clean slate. But most importantly. I got to hold my novel in my hands and see it on the store shelves – a goal I’d been dreaming of my entire life.

The 2011 winner – Rohan Wilson with The Roving Party – was recently awarded the Victorian Premier’s Literary Award for Fiction for his second novel To Name Those Lost. Learn more about past winners and how the award changed their lives in previous blog posts.

Shortlisted authors often go on to secure publishing contracts too,  proving a great route to publication whether the overall winner or not. Recent examples include Romy Ash for Floundering and Courtney Collins for The Burial, and we’re delighted to also be publishing two more shortlisted works from 2014 with Gretchen Shirm’s Into a Turquoise Pool and Sam Carmody’s The Windy Season.

The Australian/Vogel’s Literary Award was established by Niels Stevns in order to give something back to his adopted country, with an aim of giving young Australian writers the encouragement, confidence and, most importantly, the recognition to develop their talents.

Our publisher Annette Barlow says of this aspect:

Having the opportunity to publish the winner each year and to also provide support for the shortlisted authors is a privilege. We look forward to reading a heap of wonderful new manuscripts next year.

Entry forms and further information can be downloaded from the Allen & Unwin website, with entries closing on 31 May 2015.

The winner of the 2015 Award will be announced on April 21st – look out for more news on that soon.