To celebrate International Women’s Day on Sunday, we’ve been asking our wonderful authors about what the day and its themes mean to them. To kick off, Margo Lanagan writes about the importance of stories to shine light on issues faced by women, and recent anthology Eat the Sky, Drink the Ocean, which crosses borders, genres and mediums to re-imagine the world from a feminist perspective.

International Women’s Day is the perfect time to celebrate the Australian publication of Eat the Sky, Drink the Ocean, an anthology in which I’m proud to have a story, and which was edited by Kirsty Murray, Payal Dhar and Anita Roy.

Also published by Young Zubaan, the children’s and young adult imprint of New-Delhi-based Zubaan, an independent feminist publishing house, this unique anthology involved cross-cultural connection, conversation and in some cases collaboration between Indian and Australian writers and illustrators.

Kirsty Murray has been putting up a great series of blog posts about the Eat the Sky project. The brief the editors sent the authors said, “The central idea is of re-imagining the world from a feminist perspective”, and they envisaged the ideal reader’s age as being roughly 13 to 17 years.

I said yes to contributing because Eat the Sky presented a gleam of hopefulness, ultimately to its readers but also to its contributors—and it’s hard to stay positive when the world makes it so easy to despair. Consistently victimising and demeaning women, patriarchal cultures turn our concerns into either objects of ridicule or gaming-pieces for patriarchal power play. In The Female Eunuch in 1970, Germaine Greer wrote, “Women have very little idea of how much men hate them.”

Nowadays any woman with access to the internet can be in no doubt about the degree to which she is generally despised. When articulate white Western women routinely face abuse and harassment online and elsewhere, what must be happening to women without the same privilege, wealth and safety mechanisms in place around them? When nearly one Australian woman a week is killed by her intimate partner, when one Indian woman an hour is killed because her family perceives she has brought dishonour on them, the weight of irrationality and ignorance can feel crushing.

Writing stories often doesn’t feel like the most effective way to lift this weight. And writers often remind each other—and the burgeoning writers they teach—that stories, particularly stories for children and young people, will repel readers if they emerge from outrage too early, if they lecture rather than proceeding with subtlety and depth. Watching the way the world treats women, and giving those impressions the time to compost into stories that aren’t just grunts of horror or shouts of pain and rage—I know, it’s not water-carrying or night-shift nursing or toiling in a mica mine, but it can still take the puff out of you in the long term

But when opportunities like this come up—when enterprising and impassioned editors start pushing creators at each other with instructions to talk, think, share, build something together if you want! in the name of feminism—the energy appears from somewhere. Because we do have to keep putting up, don’t we, those of us who aren’t having the stuffing beaten or acid-attacked out of us? We have to keep making some noise, somewhere, so that ongoing efforts to render invisible all that violence, hatred and injustice against women don’t succeed. 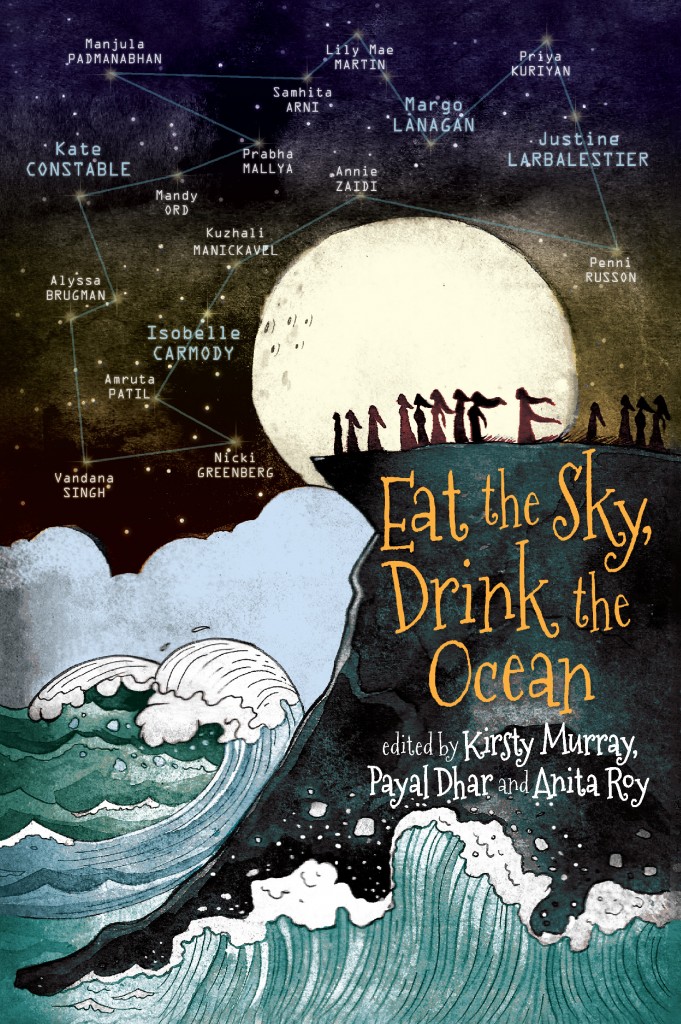 When you see Priya Kuriyan’s cover for Eat the Sky, Drink the Ocean, you’ll think, But that’s such a beautiful artefact to emerge from all this grim thinking! And when you open it, the light, the laughter, the intensity, the fun that pour out at you will give you heart. Even my story, about young people confronting one of the lesser forms of violence against girls, points to possibilities for combating sexist behaviour.

It’s a big sky, sometimes full of thunderclouds and shafts of straight-out dangerous lightning. But sometimes you’ve just got to stand up and take one small bite out of it.

Margo Lanagan’s latest novel is Sea Hearts (The Brides of Rollrock Island in the US and the UK), which won the Barbara Jefferis Award in 2014 for “the best novel written by an Australian Author that depicts women and girls in a positive way or otherwise empowers the status of women and girls in society”. As well as her story in Eat the Sky, Drink the Ocean, her latest collections of short stories are Yellowcake and Cracklescape, while Margo is also one of the superhero authors of Zeroes – out later this year.

Check back all this week for more of our authors writing about International Women’s Day.