We’re delighted that I, Migrant by Sami Shah and A Short History of Stupid by Helen Razer & Bernard Keane have both been named amongst Australia’s most amusing books, being shortlisted for the inaugural Russell Prize for Humour Writing from the State Library of NSW. 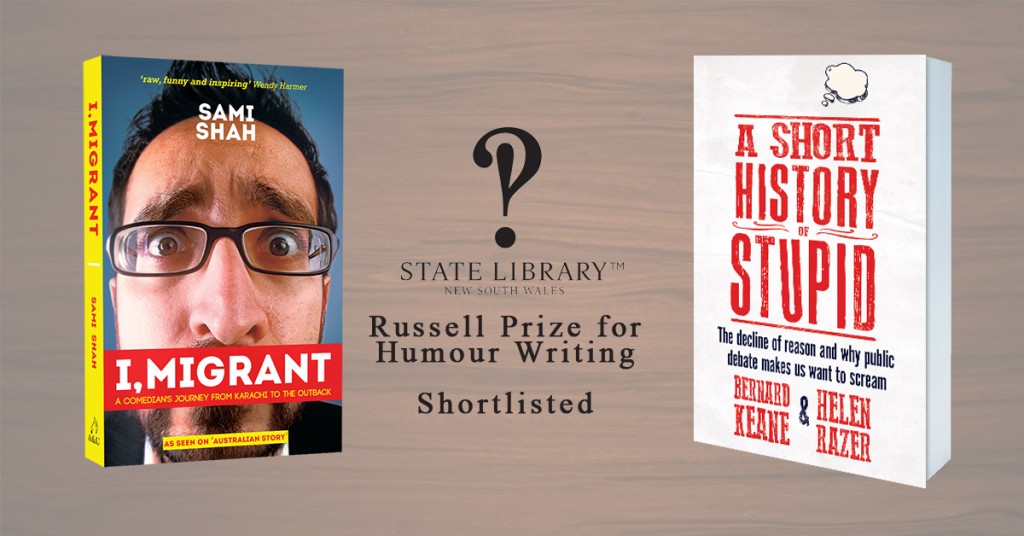 This new prize, to be awarded biennially, aims to celebrate, recognise and encourage humour writing, and to promote interest in this genre. Chair of the judging panel, author and Faber Academy course director, Kathryn Heyman said of the award:

Humorous writing requires more than the ability to craft a punchline. The best humorous writing demonstrates profound intelligence, deep understanding of human nature, empathy, linguistic skill and perfect timing. It depends on a sharp vision and a certain fearlessness. These qualities are amply evident in the shortlisted titles for the inaugural Russell Prize for Humour Writing.

Here’s what the judges had to say about our shortlisted books:

A Short History of Stupid, The decline of reason and why public debate makes us want to scream by Helen Razer & Bernard Keane

Keane and Razer’s A Short History of Stupid is a precise, funny and urgent description of the scattering inattention and falsehoods which are laced like sugar through so much of our public debates. Whether calling out the ‘cheap meth of personal development seminars’, in cold fury counting the deadly potential cost of anti‐vaccination or writing the wittiest consideration of property rights as the basis of liberal democracy this side of David Hume, Keane and Razer deftly scupper much of the unexamined nonsense that tweets, updates and opines its way into our consciousness.

You can read an extract of A Short History of Stupid below, with Bernard Keane on the War on Terror and he tackles Conspiracy Theories over at The Daily Review, while you’ll find an extract from Helen Keane on The Birth of the Individual at The Guardian.

Here’s Bernard and Helen talking to Paul Barclay on Radio National’s Big Ideas program about How did public debate get so stupid?

I, Migrant: A comedian’s journey from Karachi to the outback by Sami Shah

By turns moving, shocking and laugh‐out‐loud funny, Sami Shah’s memoir, I , Migrant, is a humorous and intelligent look into the mind of a comic. Shah chronicles his life as a journalist in war torn Karachi, where he witnesses the aftermath of the assassination of Benazir Bhutto, to his immigration to outback Australia and subsequent discovery that Australian wildlife comes with dangers all of its own.

You can read extracts of I, Migrant, about boat people and refugees here, about how he survived death by kangaroo in The Australian, or about sex on Sami’s website, and hear his conversation with Richard Fidler below:

The full shortlist of books for the $10,000 biennial Russell Prize for Humour Writing:

The winner will be announced at the State Library of NSW on 25 June 2015, and full details can be found here.

Sami, Bernard and Helen are all appearing at the Sydney Writers’ Festival next week, and if you want to hear them book soon as they’re already selling out shows.