If you hadn’t already noticed (evidenced here, here & here for instance), we take our baking and cake eating very seriously. To celebrate Cancer Council’s Biggest Morning Tea we hosted our annual bake-off with guest judges Annabel Crabb and Fiona Inglis facing quite a challenge in rating the competition. 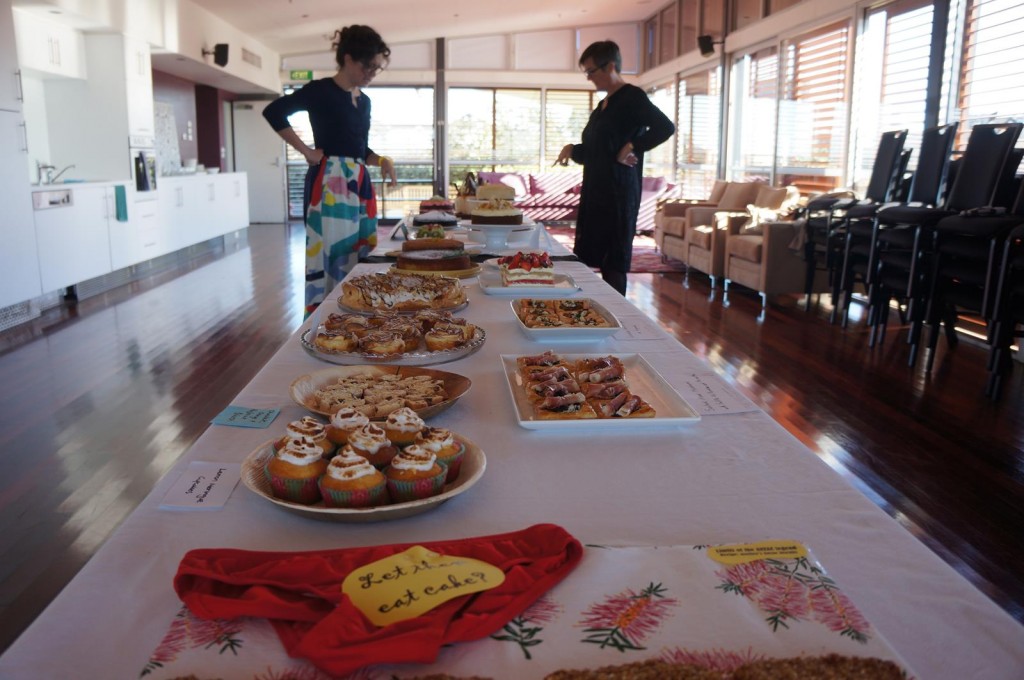 In Annabel Crabb we were lucky enough to have one of Australia’s most beloved journalists, authors and speakers as our judge, and one who has found an accidental second career as host of ABC’s enormously popular series Kitchen Cabinet. As well as being a writer and entertainer, Annabel is a celebrated baker, and on Kitchen Cabinet she has eaten with Australia’s most influential political leaders and shared her magnificent desserts in kitchens around the country.

Joining her was literary agent Fiona Inglis, who knew what she was letting herself in for having attended our Chocolate Promise baking celebration! Being the agent for last year’s judge Liz Harfull, Fiona had been swotting up on CWA judging in preparation!

After last year’s Blue Ribbon and Honey themes, this year we had the more simple, but open, Cake or Other categories.

What a variety we got, there was certainly cake. And there was a healthy slice of Other too.

With political statements from an Anzac Biscuit Anarchist, and even a cunning ploy of using a cake straight from the cover of Annabel’s forthcoming cookbook, entrants went to all lengths to earn favour from our judges, and it was a closely fought affair too.

Take a look at the stunning entries below.

Now if you’ve ever seen or heard Annabel talk (and you should, check out her podcast with Leigh Sales) you’ll know she’s riotously funny (Leigh’s letter to Annabel as part of People of Letters recently was on why they could no longer be friends, citing the likelihood of wetting herself laughing in public). And this was very much evident in her assessment of the cakes – highlights below!

The first thing I said when I walked in was Holy Shit! This one was at the front, and I’ll be perfectly frank, my private thought was ‘You’re not going to win smartarse…’.

It was a cutting challenge, we unfurled some of the shardwork, we cut in and the slice came out like a quickly delivered c-section baby. And then I peered into the crevasse and just went ‘Waaah, that b******’s got it completely right!’. A very strong place to start.

For my personal taste, this is quite sweet, it nearly killed me. But I also look at it and think you undertook a lot there, and you pulled it off. It’s kind of like the Beyonce of cakes.

Our winner in the ‘Other’ category was Anika’s Apple Roses. Annabel said:

This took about three seconds to judge, because this is outstanding!

It’s got glamour, it’s got perfectly cooked pastry, it’s got a little apricot surprise, it’s got gorgeously curled up little apple slices which have done exactly the right thing and ended up looking like roses!

My only fear is that someone’s picked this up from a patisserie!
[It was in fact baked in the office oven!]

For those wanting to play along at home, Anika’s Apple Roses come from this recipe.

And our overall winner, was Wenona’s Autumnal Apple cake, with Annabel saying:

We love this cake, it’s kind a bit of a doormouse. It’s a bit brownish.’I’m just here, I’m next to the nightclub go-go dancer, I’m just y’know’.

It’s a great cake, the apple part is spectacularly good, it doesn’t fall into any of the trials of apple cakes where the apples fall to the bottom, or don’t cook, or are a bit dry, or anything like that. Then around and inside it you’ve got this caramel frosting which has really worked.

Fiona rounding up proceedings with our winner saying:

This was a cake that didn’t show off as Annabel said, it looked kind of messy, but to taste it and to look at it, it’s been beautifully decorated and it was delicious to eat, and the apple consistency throughout was perfect!

If you want to try this one at home, Wenona’s winning Autumnal Apple Cake comes from this Ottolenghi recipe.

Obviously our staff are such hardened cake critics that we have our own vote on what the winning cake should be, which can be tricky when some entries are gobbled up so quickly, but this year’s winner of the People’s Choice award was Michelle’s Chocolate Whisky Cake, and we need to share Annabel’s comments on this too as they’re wonderful:

Also, it’s got whisky in it, and they’ve used the right whisky as well, it’s a really smoky whisky so the cake has got this beautiful, complicated, surprising flavour, it’s a cracker, an absolute cracker.

You can look forward to Annabel’s book Special Delivery from Murdoch Books in time for Christmas, here’s what you can expect: 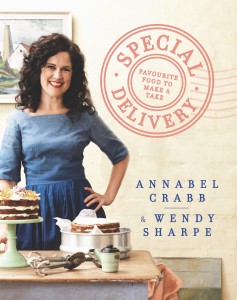 In Annabel Crabb’s accidental second career as the host of political cooking show Kitchen Cabinet, she takes dessert to the homes of politicians, and the message of the dessert is clear. It’s, ‘I come in peace.’ She famously won over Bob Hawke with a plate of Chocolate Choux Buns, Joe Hockey with an Apple Tangle Cake and Tony Abbott with a Nutty Quince Crumble.

But the best things ever said by food are conveyed in quiet tones, between friends and family, at times when most needed. It’s more than, ‘Here’s a casserole.’ It’s, ‘I mightn’t be able to be with you but you’re so important to me.’

Now in Special Delivery, Annabel has teamed up with her childhood best friend, fellow food tragic and recipe consultant for Kitchen Cabinet, Wendy Sharpe, to bring you over 100 of the most winning recipes to make and take to those you love. Included here are recipes for savouries and, of course, a swag of delicious desserts, all with instructions on how best to transport them (or eat them straight out of the tin, if you so desire).