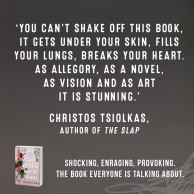 First it started with our staff, obviously, then came the critics and early readers’ reviews, and it hasn’t stopped – with more and more people raving about, debating and dissecting Charlotte Wood’s remarkable and important novel The Natural Way of Things.

(We called it pretty early on in the year, btw)

@charlottewoodau talking about her new book – the natural way of things. Sounds incredible!! Well done to @AllenAndUnwin at #LEBConf15

#LEBConf15 can't wait to get my hands on The natural way of things @charlottewoodau pic.twitter.com/T4aa5azOSj

It has proved, what we’ve known for some time, to be the perfect book club book (we made reading group notes, not that we think you’ll struggle for discussion points), with this highlighted by ABC’s The Book Club getting stuck in to it, with overwhelming love and a small voice of dissent. You can watch that below (while it was also voted 4th best book, and top Australian novel, by The Book Club viewers):

A fantastic discussion of The Natural Way of Things on @thebookclubABC. It's a tough book to read but everyone needs to read it.

We’ve also seen a beautifully moving response to the book from a reader, Bri, who felt compelled to write Charlotte a letter but instead turned it into a video for the world to see:

The Natural Way of Things was a frequent pick from readers, writers and reviewers (and of our staff) in end of year lists. Here’s some of these comments in The Australian:

My top pick, however, is Charlotte Wood’s confronting, confounding novel of mysteriously kidnapped and imprisoned women, The Natural Way of Things. Next week we will run our annual Books of the Year, in which writers and critics choose their favourite reads of 2015, and the early signs are that Wood’s book will be the most mentioned.

And so it proved:

Charlotte Wood’s The Natural Way of Things is another ferocious exploration of femininity in a technically proficient novel about girls imprisoned and tortured for “promiscuity” in a dystopian Australia, based, sad to say, on grim historical reality.

In The Natural Way of Things, Charlotte Wood has written a novel as riveting and as dark as any of the Grimms’ fairytales.

Charlotte Wood’s novel about 10 young women imprisoned for their involvement in sex scandals with prominent men sees her characters forced into an engagement with themselves, their bodies, and the way they are seen by contemporary society. The book is about landscape, too — the author invents an unnamed, parched piece of Australia that slowly begins to offer something to the trapped women. It’s a remarkable book, like no other I’ve ever read. And like all of Charlotte Wood’s work, it is slyly very funny.

Charlotte Wood made me a mess of visceral rage with The Natural Way of Things;

And in The Sydney Morning Herald there was more of the same:

The standout fiction book for me is Charlotte Wood’s The Natural Way of Things, a nightmarish, visceral telling of the fate of a group of young women each individually involved in public sex scandals with powerful men.

I’m not the only one who admired Charlotte Wood’s The Natural Way of Things, a beautifully controlled work about men’s fear and hatred of women.

Charlotte Wood’s The Natural Way of Things (Allen & Unwin) goes straight beneath the skin, into long conversations about the punishment of women, literal and metaphorical. Yolanda, young and fierce, is one of the best female characters in contemporary fiction.

Like many people I was very impressed by Charlotte Wood’s The Natural Way of Things, a book distinguished by the unsparing ferocity of its moral vision, its psychological acuity and the contained, steely power of its prose.

While over at The Guardian, Brigid Delaney had this to say of it:

I gobbled up Charlotte Wood’s The Natural Way of Things in one sitting – it’s incredible, very chilling. The novel opens in a nameless place somewhere in rural Australia where a group of 10 young women wake up, having been drugged and taken from their homes. We – and they – are left wondering why they are here (and where here even is). As the novel gallops along, it becomes clear these women have something in common – they’ve each been involved in a high-profile sex scandal. The vibe is Margaret Atwood meets Wake in Fright. It’s a rollicking read and unashamedly political. It explores how power, the media and the judiciary fight back when they are attacked. How they work against women is laid bare. You won’t look at the world the same after reading this book.

Caroline Baum at Booktopia named it her Book of the Year, saying:

Definitely the book that has generated the most justifiable buzz this year. This unsettling novel stopped me in my tracks, forcing me to ask myself uncomfortable questions about Australian attitudes to women. No book has haunted me like this one, its grim premise provoking urgent, important, all-too-topical questions. And while that is uncomfortable, it also makes for a bracing, invigorating, read: here is a book that throws down the gauntlet and asks: so, is this who we really are? And if it is, then what are we going to do about it? This book punches Wood straight to the very top of the list of our boldest, most imaginative writers. I am going to stake my reputation on this one, predicting that it is destined to win one or more of our major literary prizes in a very strong field.

And finally, here’s a selection of things that readers have been discussing online about the book plus a selection of Goodreads reviews. If you’ve not read it yet, get to it, and join the discussion!

Goodreads reviews for The Natural Way of Things by Charlotte Wood