We’re thrilled that Leigh Hobbs has been named as Australia’s Children’s Laureate for 2016-17, following on from Jackie French and inaugural pair Alison Lester and Boori Monty Prior.

Huge congratulations to Leigh, who’s subversive humour has delighted children for more than two decades with more than 20 books, including the iconic characters Old Tom, Mr Chicken and Horrible Harriet.

Leigh says the theme for his two-year term as Australian Children’s Laureate will be ‘to champion creative opportunities for children, and to highlight the essential role libraries play in nurturing our creative lives’.

As a former teacher, prior to becoming one of Australia’s most loved authors and illustrators, Leigh Hobbs is well placed to make all children to feel they are storytellers and artists:

I would like to somehow give the kids the feeling that even though most people aren’t artists or writers, that doesn’t mean kids can’t write funny poems or do funny drawings.

He’s also hugely supportive of libraries, and wants to highlight the essential role libraries play in nurturing our creative lives’ during his two-year term as Australian Children’s Laureate.

Libraries have played an enormous role in my life. Reading and exploring history and art is something I have been able to do because of libraries. I’m passionately interested in histories and cultures and I hope that through my work I can encourage children to explore and experience these things too.

This weekend Leigh kicks off his time as Children’s Laureate with the Kids’ Big Book Spectacular at the State Library of Victoria, while on Thursday 25 February you can chat online with Leigh Hobbs answering questions from students thanks to ABC Splash & the Centre for Youth Literature – find out more and ask your questions on the ABC Splash website. 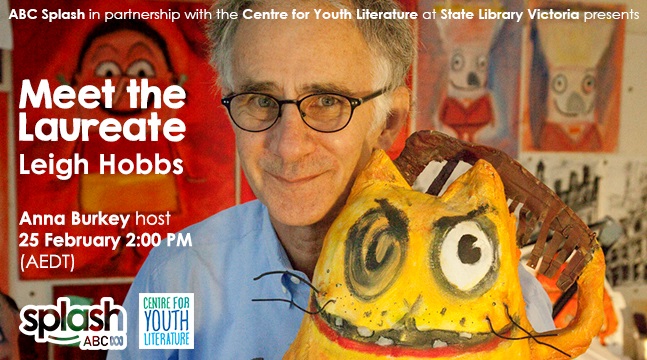 For more information about the new Children’s Laureate Leigh Hobbs, read an interview with him in The Age and another in The Herald, while you can hear Leigh talk about getting children reading on ABC’s The Conversation Hour below (15:30 mins in), as well as his 25 years of teaching and support of libraries.

Leigh also has revealed Mr Chicken’s next destination – Rome! We can’t wait to see Mr Chicken Arrivera a Roma which will be out later this year, along with the plush toy pictured above – because who doesn’t want their own Mr Chicken?!