The Last Painting of Sara de Vos is one of the most anticipated books of the year, both here in-house and in the press, so we have gathered together some of our staff raves about Dominic Smith’s breathtaking new novel to share with you.

The story is one that charts the collision course between a rare landscape by a female Dutch painter of the golden age – Sara de Vos, an inheritor of the work in 1950s Manhattan – the rich Americajanen Marty, and a celebrated art historian who painted a forgery of it in her youth, the Australian woman Ellie. Read on to find out more about why this story has captured the hearts of so many. 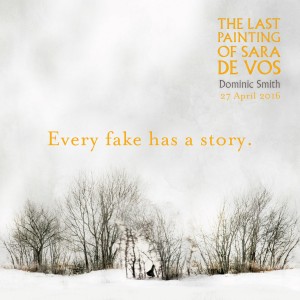 I LOVED it! Devoured it. Had to keep putting it down because I didn’t want to finish too quickly. I was completely drawn in from the first page till the end. There’s much I loved about it. The sense of place – such loving and vivid descriptions of New York in the 50s, Holland in the 16th century, Sydney in 2000.

The characters – Marty! So real, so flawed. Probably my favourite, but I also relished being in the lives of the two key women. It was the perfect holiday read – some intrigue, some romance, a great plot and all wrapped up in intelligent, taut and descriptive writing. A real winner.
– Jenny Hellen, NZ Publishing Director

Dominic has written something quite extraordinary. The Last Painting of Sara de Vos is so intelligent, its characters so beautifully drawn, its narrative so compelling, its emotional impact so powerful, its language so pitch-perfect, that it’s quite simply one of the best books I’ve read for years.”
– Tom Gilliatt, Publishing Director 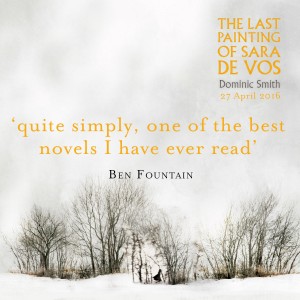 When reading The Last Painting of Sara de Vos at the end of last year, my two-hour train journey was not long enough! I devoured this book from cover to cover. I loved the Mad Men element of the storyline set in 1950s Manhattan and the intricate detail of how one goes about painting a convincing forgery. And I loved the 17th century world Dominic evoked in the fascinating storyline about Sara de Vos. I didn’t know where this plot was going to take me but I gladly went along for the ride.
– Jane, Marketing

It was clear I was in for a smooth drive in a classy car when I started reading The Last Painting of Sara de Vos but later I realised I was on a deeper journey and felt profoundly  surprised and moved by the final chapters. Since then, I’ve seen The Greats exhibition at Art Gallery NSW and found myself looking into the glazes as Dominic Smith’s iridescent descriptions of creating a masterwork swept through my head. For me it has equalled The Girl with the Pearl Earring, Miss Garnet’s Angel, Perfume, Possession and Year of Wonders. I also found the last third of this novel very surprising and it’s given me the urge to read it again.
– Sarah, Faber Academy

Much like an oil painting, this beautifully written novel is built up layer by layer, and through the different characters and their fascinating individual stories the reader skips easily between 17th century Holland, 1950’s New York and modern day Sydney. There are also underlying mysteries, and these are revealed much as layers of a painting can be stripped back, exposing secrets hidden underneath. It’s only towards the end, in the equivalent of stepping away from the canvas, do you begin to see the full picture come into focus.

[Beware slight spoilers in white below]

Away from the artistic analogies, there’s so much to love about this wonderful novel. You’re swept through the different timeframes by the various mysteries, while the settings are atmospheric and evocative. In particular there’s fantastic characterisation, with it being particularly easy to connect with Ellie and her feelings of being lost, both on the other side of the world from home and in trying to figure out her life during her twenties. While rather unlikeable, until becoming more reflective in his old age, Marty too is lost despite seemingly having it all – it’s only when trying to track down the theft of his painting does he begin to find focus. Then there’s the tragic story of Sara de Vos, who is left lost by the death of her daughter and abandoned by her husband, who you root for and care about as she faces further challenges. As well as all this, the book provides a fascinating insight into art history, forgery and theft, all of which seems meticulously researched, and leaves you visiting galleries and viewing paintings with fresh eyes. This is a book of many layers, any of which would captivate readers, all of which come together to leave them spellbound.
– Andrew, Marketing

The Last Painting of Sara de Vos is so good it gave me shivers as I was reading it. A dazzling literary tour de force, this novel is also as propulsive as a thriller in the way the tension tightens and escalates. Superb evocations of three very different worlds create almost unbearable suspense as their stories intertwine and intersect, and the characters are as human and flawed as one dares hope for in fiction. I believed in them absolutely. In Sara de Vos and Ellie Shipley, Dominic has created two unforgettable female characters at odds with their times but holding fast to their notions of art and truth. I was thrilled and inspired by them and this extraordinary novel and I can’t wait to share it with and readers everywhere. Dominic is an astounding talent and The Last Painting of Sara de Vos is the devastating, sophisticated and transformative novel that will bring him the glory he so richly deserves in the country of his birth.
–  Jane Palfreyman, Publisher

I read this over the holidays. It’s one of those rare books that is extremely well written and profoundly moving but also has terrific narrative pull. Then add vivid, believable characters and settings. Throw in one of the best endings I’ve read in a while and we have an absolute winner. Oddly, I only got around to reading The Goldfinch a couple of months ago so it is still fresh in my mind. For my taste The Last Painting… is far more tightly written and has none of the monotony that sometimes made The Goldfinch drag.
– Liz, Sales Rep

I finished The Last Painting of Sara de Vos over the weekend – what a beautiful book! He writes with such a light touch (the writing never feels laboured), and I liked the fact there really isn’t a point in the novel at which it sinks into sentimentality. The character of Sara is beautifully rendered, and the juxtaposition and switching between timeframes and settings – the austerity of 1600s Holland, 1950s New York and Sydney in 2000 – is brilliantly done, and I felt equally engaged with the storylines of all three timeframes. I just loved it.
– Alexa, International Agencies Manager

It isn’t just in-house love, there’s also been some wonderful early reviews from booksellers, and the trade press on both sides of the Atlantic:

Smith’s latest novel is a rich and detailed story that connects a 17th-century Dutch painting to its 20th-century American owner and the lonely but fervent art student who makes the life-changing decision to forge it. The narrative stretches from a period of grief in de Vos’ life that compelled her to paint At the Edge of the Wood, to 1950s New York to the year 2000 at a museum in Sydney where original and forgery meet. This is a beautiful, patient, and timeless book, one that builds upon centuries and shows how the smallest choices—like the chosen mix for yellow paint—can be the definitive markings of an entire life.
– Kirkus starred review

The Last Painting of Sara de Vos is a deeply researched, beautifully written, intellectually absorbing novel that also has the qualities of a page-turner. It unfolds across three settings: 17th-century Amsterdam, 1950s New York and Sydney in 2000. An Australian art historian, Ellie Shipley, is at the centre of the last two stories, and in a troubling sense is instrumental to the Dutch story too. She is a fabulous character, full of strength and frailty. The Last Painting of Sara de Vos is a tremendous story of art, deception, love, ambition and the place of women in the world, and in history. From the opening pages you know you are in the hands of a writer at the top of his game.
– Stephen Romei, The Australian

With great skill, Smith weaves three interconnecting stories of Sara De Vos, the young Ellie and her final confrontation with her past in Sydney. It’s a wonderful narrative masterfully told and absolutely compelling. It will appeal to a wide range of readers, accessible yet complex in the manner of Geraldine Brooks or Anthony Doerr. I predict it will be one of the big books for 2016.
– Mark Rubbo – Readings, Books + Publishing 5* review

After all that glowing praise, find out what the fuss is and read the opening chapters: