We’re overjoyed that Charlotte Wood has won The Stella Prize with her remarkable novel The Natural Way of Things. Our staff have been HUGE supporters of this book since it first landed on our desks, reviewers and readers swiftly followed suit, and the discussions haven’t stopped and look unlikely to do so anytime soon. Especially as this book, its themes and its characters, still remain deeply lodged in our brains, even now, over a year after reading.

As with her gorgeous ode to independent bookshops after her win at the 2016 Indie Book Awards, Charlotte shared an incredibly moving speech which was a powerful and thoughtful call to arms for writers and creatives, and in particular women.

Find a small snippet below, with Charlotte’s five reasons to write (and to read), and the importance of literature and creating art.

On one very bad day while writing this novel, I thought again about giving it up, and I sent this email to a couple of my writing friends.

Not going so well this week, after all. Somehow swamped again with the futility of this work, trying to find the point of writing a dark, bleak book about girls imprisoned and trapped and reviled. Yesterday I couldn’t see how I was not just adding yet more ugliness to the world. But I have just bucked myself up a little bit, by writing a list of reasons to keep going. Here’s what I came up with. Reasons to write:

I returned to that email for comfort often through the writing of my novel, but it came back to me again this week because I think perhaps those are also reasons to read, and I want to say something about literature as a force for good in this embattled world of ours.

I want to stake a claim for literature as an essential social benefit, in and of itself. I would like all writers – especially those here tonight and most especially women, who so often put their need to make art behind the needs of others – to remember what I rediscovered on that bleak day I mentioned earlier: that to create art is itself an act of enlargement, of enrichment and affirmation. To write well is to light that candle in the darkness, offering solace, illumination – and maybe even the possibility of transformation – not just for the writer but for the reader, and for our society itself.

Read the whole speech here, and you can also hear Charlotte discussing her win with RN Books and Arts below:

And briefly, here’s what judges said of The Natural Way of Things:

“Exposing the threads of misogyny, cowardice and abuses of power embedded in contemporary society, this is a confronting, sometimes deeply painful novel to read. With an unflinching eye and audacious imagination, Charlotte Wood carries us from a nightmare of helplessness and despair to a fantasy of revenge and reckoning.”

Now in its fourth year, The Stella Prize is open to works of both fiction and non-fiction by Australian women, and this year attracted more than 170 entries before being whittled down to a longlist of twelve and then a shortlist of six. After having books shortlisted in 2013 (The Burial and Questions of Travel) and 2015 (The Eye of the Sheep), we’re thrilled to have a winner in 2016 of this young but hugely important prize with an incredibly appropriate novel in The Natural Way of Things.

An interesting point for fact fans, our publisher Jane Palfreyman was the publisher of all those books listed above (along with five Miles Franklin winners), and you can read a fantastic interview with her, Charlotte, and another of authors Christos Tsiolkas about her role in their work, alongside some other great Australian authors and publishers sharing their thoughts on editing.

If you want to know what Jane’s next big book is going to be, you’ll want to have a look at the praise for The Last Painting of Sara de Vos by staff, booksellers, and reviewers. 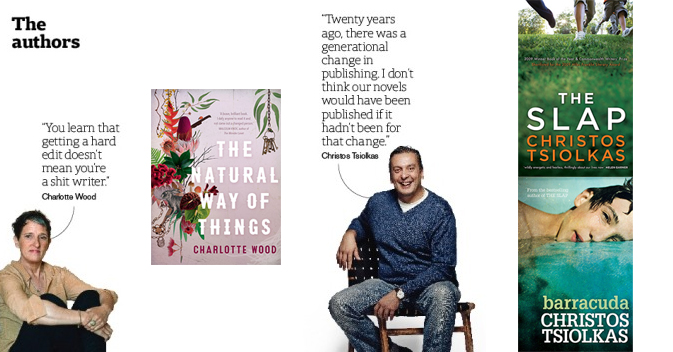