Congratulations to Katherine Brabon, winner of the 2016 Australian/Vogel’s Literary Award with her debut novel The Memory Artist!

Katherine goes home with a copy of her newly published novel, along with a cheque for $20,000 thanks to the generosity of Vogel’s and the Stevns family who in 1980 founded the award, Australia’s richest and most prestigious award for an unpublished manuscript.

At an awards party held at our Sydney office, the wonderful Thomas Keneally spoke passionately about his joy that the novel is still alive, that young people are still reading and more importantly writing, and the threat to Australian literature by the removal of Parallel Importation restrictions. He also took great pleasure in announcing Katherine Brabon as the winner from the shortlist of four young writers, reading from her work, and saying: 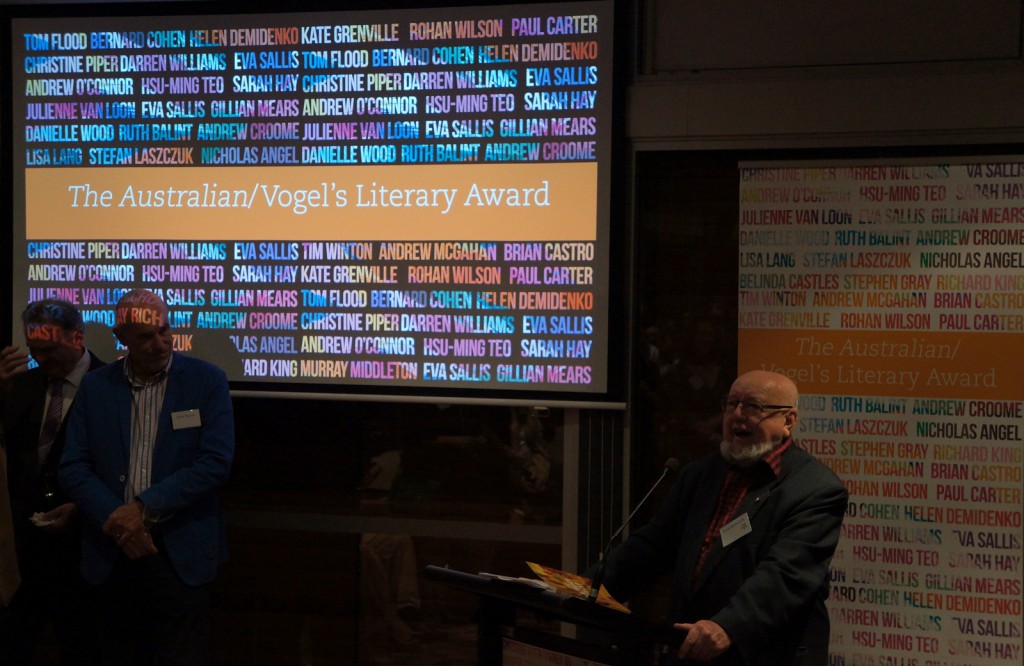 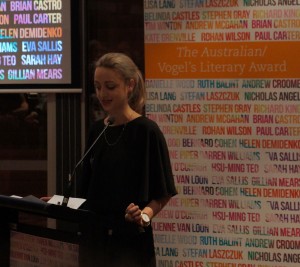 On accepting her award, Katherine spoke of the struggle that artists in other countries face in sharing their work, a theme of her novel:

It is an honour to receive this award, and to be presented with it by the great Tom Keneally. My novel is called The Memory Artist, and lately I’ve been giving a lot of thought to the words memory and art.

I can write in the absence of danger, I write not because I had to, but because I wanted to. I also felt compulsion, I had a tiny inkling of what it feels like to have a sense that I must say this, I must tell this. For me it was to tell the story of the repression of words, and people, and the reverberation of that over decades and generations.

Although the novel centres on the Soviet Union, writing it opened up my mind to a lot of questions about whether art can triumph in its struggle, and whether that’s the point at all, and maybe it’s the fight that is the point. What it has taught me is to say a memory is to tell your own story, and repressing that is really repressing an individual’s own art.

Today is the 30th anniversary of the Chernobyl nuclear disaster, and so that’s been on my mind a lot, also because I’ve been reading a translation of an oral history of that catastrophe, written by the Belarussian writer Svetlana Alexievich. She’s a prominent critic of their current leader, and her work is a struggle for memory, and for art. In 2015, she won the Nobel Prize for literature, and to this day she’s still not published in her home country. Her name is missing from school books, and her books enter Belarus via the underground, just as in my novel in the Soviet Union novels are brought in through the underground. So repression is still very much alive, unfortunately.

So to reach my point, art and literature matter, and people shouldn’t have to experience persecution for the value of art and literature to be appreciated by those in better circumstances. So I would like to commend, and wholeheartedly thank those who support the arts with such a generous award.

So today as I think of writers, repressed in the world, I feel grateful I have a book I can hold in my hands tonight, and can put into the world without truly knowing the dangers that others face. But I am proud to stand with them, in creating the necessity that is literature. 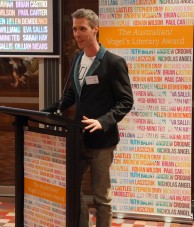 Both Vogel’s Award judges Rohan Wilson and Stephen Romei made comment on the strength of shortlist, saying it’s the strongest they’ve ever seen, and a good indicator of the strength of writing in this country, with Rohan saying:

As judges the task we set ourselves is to find the best young talent, and the best novel that’s going around at the moment in Australia. And this year, it’s pretty safe to say we’ve managed to find four absolutely brilliant new writers, four absolutely brilliant novels. I think it’s fair to say it’s the strongest shortlist we’ve seen, I don’t think that’s an exaggeration. They’re seriously huge talents.

About The Memory Artist by Katherine Brabon:

How can hope exist when the past is so easily forgotten?

Pasha Ivanov is a child of the Freeze, born in Moscow during Brezhnev’s repressive rule over the Soviet Union. As a small child, Pasha sat at the kitchen table night after night as his parents and their friends gathered to preserve the memory of terrifying Stalinist violence, and to expose the continued harassment of dissidents.

When Gorbachev promises glasnost, openness, Pasha, an eager twenty-four year old, longs to create art and to carry on the work of those who came before him. He writes; falls in love. Yet that hope, too, fragments and by 1999 Pasha lives a solitary life in St Petersburg. Until a phone call in the middle of the night acts as a summons both to Moscow and to memory.

Through recollections and observation, Pasha walks through the landscapes of history, from concrete tower suburbs, to a summerhouse during Russia’s white night summers, to haunting former prison camps in the Arctic north. Pasha’s search to find meaning leads him to assemble a fractured story of Russia’s traumatic past.

Judge’s comments on The Memory Artist:

A haunting, poignant and beautifully written novel, and a moving meditation on loss, memory and the impact of generational terror.
Jenny Barry, BooksPlus

Katherine Brabon’s intelligent, emotional, historically-acute Russia-themed novel is a stirring reminder that Australian literature can rise up to be anything it wants to be.
Stephen Romei, Literary Editor, The Australian

The characters are deep and rich, and the setting is never less than convincing… keeps you reading just through the sheer quality of it all.
Rohan Wilson

Our publisher Annette Barlow said of the book:

The Memory Artist is a fine novel and worthy winner of the Australian/Vogel’s Literary Award. A skilfully written journey through the landscapes of history – from snow into sunshine, through violence and friendship, of art, creativity and memory. Katherine’s novel is imbued with intelligence and meaning, and I very much look forward to seeing what she writes next.

Read the opening chapters & win a copy of The Memory Artist

Read an extract and find a chance to win a signed copy below, while you’ll find The Memory Artist in your local bookstore this week, or you can order online at Booktopia, Bookworld, Dymocks, Readings, QBD, as well as iBooks and Amazon. You can also follow Katherine Brabon on Twitter, and find more news of the book with the #VogelsAward hashtag.

Hear Katherine discuss her win and novel with Radio National’s Fran Kelly, explaining why she turned to fiction rather than non-fiction in her writing, which was based on her academic research:

I'm so delighted, overwhelmed & excited to hold this book in my hand – thank you everyone for your good wishes! pic.twitter.com/qzGs1bw8Rl