We’ve been singing the praises of Goodwood by Holly Throsby for a while now, but now that Goodwood is out in the world we thought it was time to share what others have been saying, and it’s wonderful to see that critics and readers alike are loving Goodwood as much as us!

Here’s some of the Goodwood reviews from critics and booksellers:

Goodwood is a wonderfully lush and well-realised depiction of several aspects of contemporary Australian life and its unhurried narrative style means the wide cast of characters all feel three-dimensional. Domestic violence, sexual experimentation and alcohol abuse are skilfully threaded into the story.

The intrigue slowly builds to the point where the urge to learn the truth about the disappearances becomes overwhelming. The ending does not disappoint.
– Andrew McMillen, The Australian

A little bit Twin Peaks and a little bit Picnic at Hanging Rock, Goodwood is a terrific, thoroughly Australian novel. Throsby is already celebrated for her prowess as a musician and songwriter, and with this she proves she has yet another string to her extraordinary creative bow.
– Hannah Richell, Australian Women’s Weekly

It has been a while since I lost a weekend to a debut novel. But thanks to talented songwriter turned fiction author Holly Throsby, I found myself shaking my head on a recent Sunday afternoon having spent the weekend being puzzled alongside the good people of Goodwood at the mysterious disappearance of two of their townsfolk.
– Good Reading, 5 Stars

Holly Throsby’s debut novel is lyrical without being abstruse, colloquial without being contrived. Her characters, while familiar, are nuanced and authentic, and her depiction of small-town life is bang-on in both its endearing and suffocating ways.

At multiple points while reading Goodwood I was convinced that Holly Throsby had based the titular town on the one I grew up in, which has had its own share of tragedy in recent years – the close-knit cast of characters, the power of gossip as currency, even small details like the local-humour stubby coolers everyone seems to own, all ring remarkably true.
– Alan Vaarwerk, Readings Books

There is much to admire in Throsby’s writing; the plotting, the pacing, the characters, and the sense of place. The characters are rich and myriad, from family and friends, neighbours, shopkeepers and barflies. All are beautifully realised, even when animated for a catalyst cameo … (do as break-out quote?) You’d be dumb as a box of hair not to get a copy of Goodwood. It deserves the high density of acquaintanceship it demands. Just don’t rush it, it’s not be rushed.
– Sydney Arts Guide

With laconic wit and deft plotting, Throsby seamlessly weaves Jean’s coming-of-age with the novel’s central mystery, lending the narrative a touching sense of nostalgia. Throsby hits all the right notes in Goodwood—similar to Karen Foxlee’s The Anatomy of Wings and Craig Silvey’s Jasper Jones, it’s a nuanced portrayal of the damage created by hidden truths in tight-knit communities.
– Bookseller + Publisher magazine, 4.5 stars

This is a story full of bright, endearing characters and disturbing secrets. It’s a story that will haunt you long after you have finished reading it, and one that you will probably want to revisit time and again.

Goodwood employs a familiar setting, immediately drawing you in and comforting you, then turns everything you know and expect on its head with a mysterious discovery, a series of disappearances wand the arrival of newcomers, unusual in a town like this one. I cannot encourage you to read it enough!
– Better Read Than Dead

As well as the critical and bookseller acclaim, readers are loving it too, with a raft of 4 & 5 star reviews on sites like Goodreads:

If you are looking for an Australian story beautifully told then Goodwood is your next book. It’s a coming of age novel with an incredible sense of place … I don’t want to compare Goodwood to another book, it stands on its own. But if you loved Jasper Jones, you will love Goodwood.
– Elizabeth, 5 stars

Goodwood was fantastic. I loved the voice of the character, the totally plausible Australian small town setting and the mystery underlying the story. I don’t exaggerate when I say I think we have a modern Aussie classic on our hands. This will be the book to buzz about this Christmas.
– Ruth, 5 stars

I feel like I just time travelled. Holly Throsby has perfectly captured life as a 17 year old in a small town in 1992. Nostalgia sans overt sentimentality. The plot twisted and turned enough to keep me interested but it is the characterisation here that is really on song. I’ve been a fan of Throsby’s songwriting for a dozen years so it’s no real surprise her debut novel is a wonderful, assured read.
– Kirsten, 5 stars

Meet the characters of Goodwood

Explore the town to meet the locals and read the opening chapters using the map below, or visit www.allenandunwin.com/goodwood 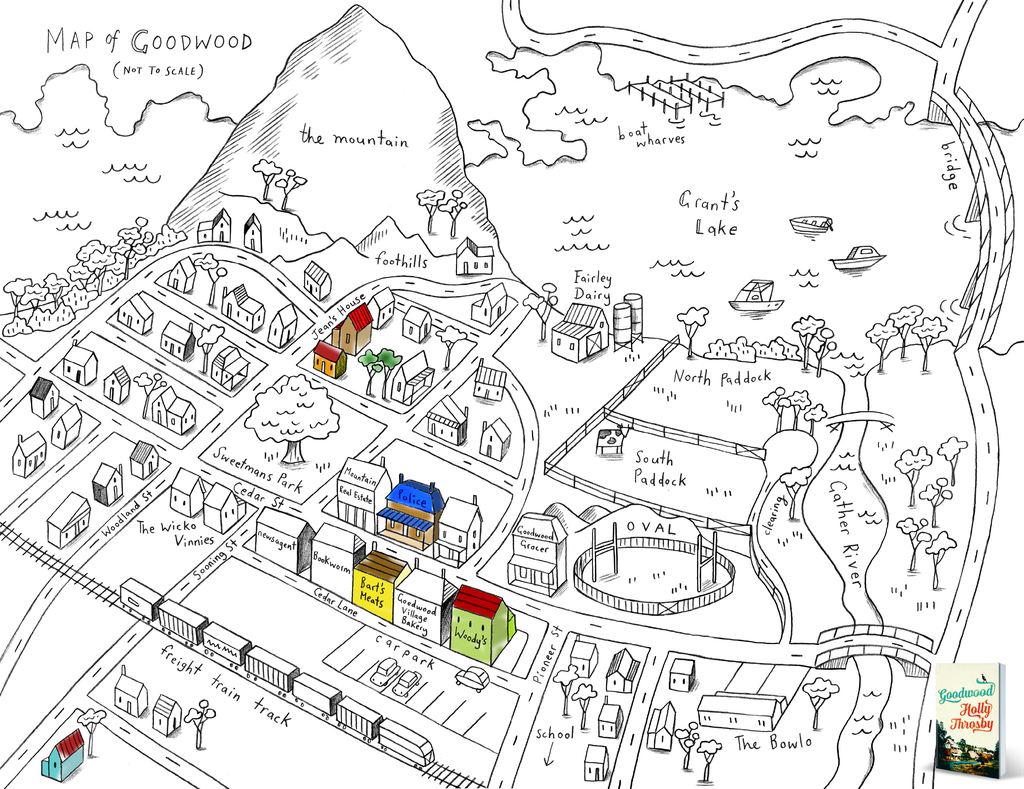