Faber Writing Academy alumni Rob McDonald shares his second coming out story, and discusses finding his identity as a writer. 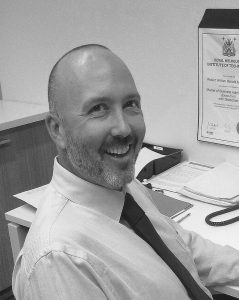 The Dunedin Botanic Gardens are beautiful. I sit side by side with my Dad in the café whose roof is a giant faded concrete sun umbrella. Outside in the sun, kids run around the bronze Peter Pan statue and the duck pond. It’s quiet in between school holidays, and the handful of people enjoying the day are made up of young kids with caregivers, the retired, and a couple of tourists feeding the ducks and seagulls. Occasionally a group of Otago Uni students amble past on their way to afternoon lectures.

It’s September and I’ve just finished Faber Writing Academy’s Writing a Novel: Second Draft course in Melbourne. I’m back home in New Zealand catching up with family and also returning to the locations that form the basis of my manuscript. After spending nearly a year with these places in my head, viewing them from my characters’ eyes, the experience of now visiting them first hand as a writer is both surreal and magic.

I haven’t told Dad I’ve spent this year writing. That this was what I’d been doing with all my spare time. I grew up with my father saying reading was a waste of time, particularly fiction. Who wants to read lies, stuff people have made up in their head? Clearly my Mum, who loved literature. She was the reader, book club member, and writer. And then with Mum gone it has been my eldest brother who has been my patron, pushing me to finally get back to writing.

Dad, I’ve got something to tell you…

It’s certainly different from that Summer in 1998 when I came out as a gay man after spending a year studying journalism: different writing, different revelation.

Like many of us writers, it has been my passion as long as I can remember. My first story was a ‘What I did in my school holidays’ where I told a story about going to the beach and being bitten by a crab. Complete fiction, or lies, depending on your view point. As I grew up writing got put on the lowest priority level and was always the first to drop off, sometimes for months. That is until this year when, with study completed, daughters at a sensible age and work as under control as it can be, I finally put writing first and enrolled in the Faber Writing Academy course, Writing a Novel: First Draft.

No journey is complete without some challenges. There was a mid-year crisis where I pulled out of Faber Academy’s Writing a Novel second draft before it began. But after my awesome teachers Paddy O’Reilly and Toni Jordan talked me off the ledge, I am now confident that this is who I am, this is what is important, and this is what I want to keep doing for the rest of my life. In that weird way it does, life has expanded and now writing melds around the mix of family, work, study and friends. Of course sometimes it is a superhuman juggle but I can no longer ignore it.

My Dad’s reaction this time? ‘There’s a gurgler at the local freezing works, if the murderer puts the remains there it gets flushed out to sea and no one will ever find it.’ Quickly followed by, ‘What about the blow hole at Jacks Point? If they throw the gun down there no one will find it.’

I was sensing a theme which was very much the murderer’s POV. It was great to be plotting with my Dad. The next day we went to the hospital where some of my story is set. He was first to head to the lifts and get out on the floors so we could look at the wards. It was later I remembered that Dad too loves writing, he is always asked to perform poems at various get-togethers. Perhaps he’s not a reader and may never be, but writing is something we actually have in common.

Like any coming out, you never know how people will react. Dad’s response was one that finally cemented for me the identity that I had long failed to claim. I am a writer.

Rob McDonald is a Kiwi living in Melbourne with his two daughters and an extended family of two baby mommas, an estranged cat Flower, and Stevie Nicks the chicken. Rob works in international education and is currently writing a crime novel set in a town style forgot.

Applications for Faber Writing Academy‘s Writing A Novel scholarship and courses in Sydney and Melbourne are open now, with frequent other workshops and courses available throughout the year.