We are thrilled to have recently published the debut novel of our 2015 Faber Writing Academy scholar Pip Smith, the remarkable Half Wild, one of the most original and exciting debuts we’ve read in some time. It tells an amazing story based upon the lives of Eugenia Falleni, a true crime cause celebre that has fascinated people for nearly a century, and here Pip explains where her inspiration came from:

In 2005, Sydney’s Justice & Police Museum hosted City of Shadows, an exhibition of early twentieth-century police photographs recovered from a flooded warehouse. Many of the accompanying files that would have given the photographs context had been lost, so they were mostly selected for their provocative compositions, the half-stories they told and the eerie, alter-Sydney they invoked.

Visiting the exhibition was like witnessing a séance. From the walls of the museum, forgotten ghosts of the city gazed through us. For many of the photographs’ subjects, this would have been the only time in their lives they’d been photographed, and so—despite the trauma of their recent arrest—they’d made the most of it, dressing in their best clothes, possibly performing their role as criminal for a camera associated with the burgeoning popular art form of the movies. Even in the mugshots we did not see the deadpan expressions we have come to expect; instead we saw emotion—either performed, or caught when the subject was off guard.

I left the exhibition with the accompanying book, and later poured over the photographs for traces of suburbs I thought I knew. One picture in particular captured my attention: a mugshot of a man in a cheap suit and tie, his short hair combed into a sideways part. What struck me most was the melancholy that haunted the man’s eyes. He seemed to be performing his normalcy, not his criminality, and only just managing to hold himself together. 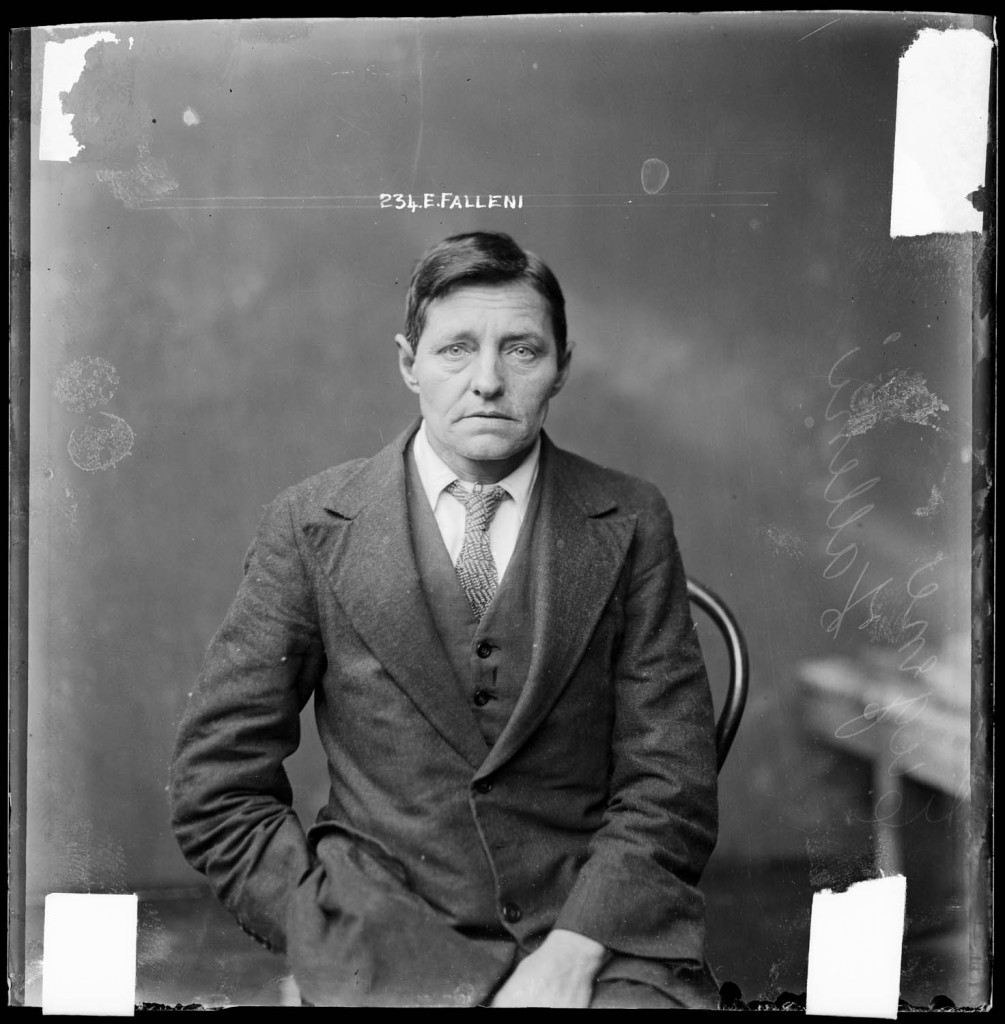 I flipped to the back of the book to read a brief footnote:

Eugenia Falleni, 1920, Central cells. When hotel cleaner ‘Harry Leon Crawford’ was arrested and charged with the murder of his wife three years earlier, he was revealed to be in fact Eugenia Falleni—a woman and mother who had been passing as a male since 1899 …

Turning back to the portrait of the sad man, his face—or my perception of his face—morphed into that of a woman’s. But in the moment that he, the sad man, morphed into she, the ‘cross-dressing murderer’, I have to admit that the thrill I felt was associated with my own jolt in perception, like the moment Escher’s black birds turn into white birds, flying in the opposite direction.

The portrait was of an indeterminate person: an unstable man and a reluctant woman at the same time. One look at Falleni’s harrowed expression, however, and the thrill quickly turned into a chill. What would it have been like, to cause these jolts in perception? What would it be like to live your life oscillating between the different roles others expected to see?

Sydney, 1938. After being hit by a car on Oxford Street, sixty-three-year-old Jean Ford lies in a coma in Sydney Hospital. Doctors talk across her body, nurses jab her in the arm with morphine, detectives arrive to take her fingerprints. She has £100 in her pocket, but no identification. Memories come back to her-a murder trial, a life in prison-but with each prick of the needle her memories begin to shift.

Wellington, 1885. Tally Ho doesn’t need to go to school because she is going to be a fisherman or a cart driver or a butcher boy like Harry Crawford. Wellington is her town and she makes up the rules. Papà takes her fishing, Nonno teaches her how to jump fences on his horse Geronimo-life gallops on the way it should, until a brother, baby William, is born. ‘Go and play with your sisters,’ Papà says, but wearing dresses and sipping tea is not the life for Tally Ho. Taking the advice of her hero, Harry Crawford, she runs away.

Sydney, 1917. The burned body of a woman is discovered on the banks of the Lane Cove River. Was she a mad woman? A drunk who’d accidentally set herself on fire? Nobody knows, until-three years later-a tailor’s apprentice tells police that his mother went missing that same weekend, and that his stepfather, Harry Crawford, is not who he seems to be. Who, then, is he?

Read an extract below: