We’ve shared the success stories from The Australian/Vogel’s Award, the winners on how the prize changed their lives and the shortlisters who also get published, but what about those who miss out completely? Here Ben Hobson writes about how NOT winning the Vogel’s Award helped him get published with To Become A Whale.

The last day of term three, 2015. An important day. It was the inter-school rugby competition my school hosted each year. I had been called upon to set up the sound system, for announcements, music, and the like, when I received a call from my wife, Lena.

Ever since I’d submitted To Become a Whale into the Vogel’s Award, I’d spent a huge amount of time thinking about it. I’d always planned on entering the Vogel’s Award, and I felt this was my last shot. I’d written four novels. I wasn’t sure I had anything else in me. I’d given this one my all. I was thirty-one years old. This was it.

I hesitated, students running around me as I setup the sound system. I wedged the phone between my ear and shoulder and said, “Yeah. Go ahead.”

The sound of an envelope being opened.

Utter despair, immediate and terrible. Even now I feel ashamed of my over-reaction. If you go back to my Twitter feed that day (please don’t – it’s embarrassing) you’ll see my raw feelings. I am very rarely unrestrained on social media – I know it could come back to bite me – but that day I threw all caution to the wind. I railed and complained and whined and yelled.

Disappointed was an understatement. I felt worthless.

I’d clearly put too much of myself in it. Not only did I feel my writing career hinged on the outcome (it didn’t) but my worth was on the line (it wasn’t). I felt like giving up. After all that – a decade of effort, a decade of facing daily doubt, a decade of sweat and work and guts – after all that, I was done.

When I got home Lena handed me the letter. It was a small note, which held in it something hopeful. Some encouraging feedback, some lovely, kind words about theme, about masculinity. But the phrase, the gold that lodged in my brain, was not the kindness, but the critique.

The book fails to reach the dramatic heights it was aiming for.

When you’re a writer, you really feel alone. Despite well-meaning friends, and fellow authors reading your work, and offering their kind and generous thoughts and comments, it still isn’t industry advice. Nobody from within the industry is looking at your stuff and critiquing it. So you feel alone, isolated. I didn’t even have a writing group.

So this advice was like mana from Heaven. God sent.

It made me re-evaluate my manuscript. I pored over it, combing every inch to find where I could heighten drama. And find a place, I did.

At the beginning of my novel, Sam’s (the main protagonist’s) mother passes away. We begin the novel with Sam trying to understand this new world he inhabits, one without the guiding force his young life had depended on. And he misses his mother acutely, every day. Trouble was, the audience never missed her. We saw Sam missing her, yes, but we never really felt her absence.

This led to a massive reworking of my novel. I went back through and inserted small scenes of Sam’s life before she passed away, to contrast with his current situation. For those of you who’ve read my book, try to imagine it without these scenes. I think it felt far less weighty.

I am eternally grateful to the kindness of the Vogel’s judges that year. They didn’t need to write me a note at all. God knows they had enough manuscripts to judge, and read. And yet they did. It was this note that prompted me to change my manuscript, which I then submitted to agencies. And my wonderful agent, Gaby Naher, reading it, and loving it. Which led to us sending the manuscript back over to Allen & Unwin, whose blog I am currently adding to.

Found To Become a Whale in a bookstore for the first time ever and the emotions are too many. @AllenAndUnwin pic.twitter.com/liVTvsab9s

The Australian/Vogel’s Award is directly responsible for me being here at all. If you’re a writer, and you feel isolated, alone, despairing, struggling, try having some people from within the industry read your work, and literary awards are a great opportunity for this to happen. You might be surprised what it ends up saying about you.

Entries for The Australian/Vogel’s Award 2019 are open now. To Become A Whale was published in 2017 to fine reviews, and a pick by Sofie Laguna as one of her favourite reads of the year.

Tension between father and son is a fairly common theme in literature but rarely has it been exploited with such a bloody background. Apart from its background and theme, the great attraction of this novel is its distinct voice. It is measured and even and each sentence is intrinsically balanced. It is a voice that can convey both brutality and love, with great conviction. – The Sydney Morning Herald

If you’ve enjoyed the work of Tim Winton, Favel Parrett and Sonya Hartnett, then you’ll find something to enjoy in To Become a Whale. Hobson’s work sits comfortably alongside those terrific authors. – Rohan Wilson, The Australian 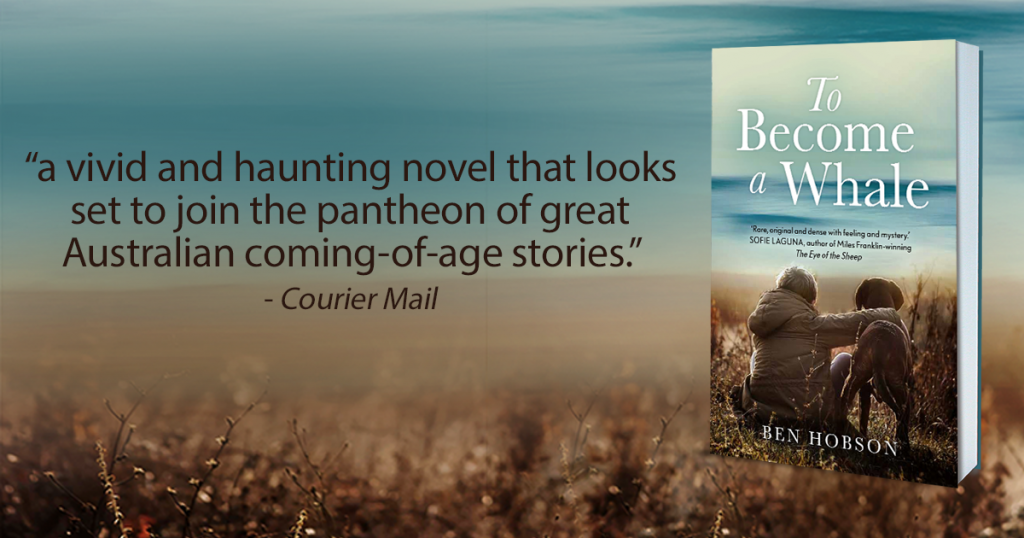 Read more from Ben on his publishing journey, including this excellent post on the editing process, over on his blog while you’ll also find him on Facebook and Twitter.