For International Women’s Day our authors are writing about movement towards gender parity, and we invited celebrated Aboriginal writer, illustrator and law academic Ambelin Kwaymullina, who comes from the Palyku people of the Pilbara region of Western Australia, to contribute an Indigenous point of view.

The wealth of Indigenous women is our children. Our children were stolen over the course of generations. Many of the thieves were women. It was white women who worked in, or were in charge of, many of the institutions in which our Stolen Generations were incarcerated. And it was white women who ran the households, the farms and the pastoral stations that benefited from indentured Indigenous child labour.

The wealth of Indigenous women is our land. Our land was stolen. And all who now dwell on Indigenous lands benefit from that theft, men and women alike. They benefit to different degrees, commensurate with their relative position within the power structures of the dominant (Settler) society. But all who have come to Australia and other Settler-colonial lands after colonisation benefit to some degree from the violent dispossession of the women who were here before.

The victories of Settler women are not, and have never been, the victories of Indigenous women. And if the global movements of women cannot acknowledge and act upon their own complicity in oppression – if they cannot meaningfully and equitably create space for all women – then these movements are not ones of liberation. They are just another Settler oppression that will be enacted in a thousand different ways upon the hearts, minds and bodies of Indigenous women.

The wealth of Indigenous women is our voices, and we are speaking in our millions. Many of us would like to join our voices to those of non-Indigenous women. But where are the spaces for us to safely speak? How can we tell our stories without having them appropriated by Settler women, as has been done so many times before? How can we speak our pain without having Settler women read it as an accusation against which they must defend themselves, and in so doing, repeat the words of the patriarchy in a different context (it wasn’t me; it’s not all (wo)men; I’ve always supported…). 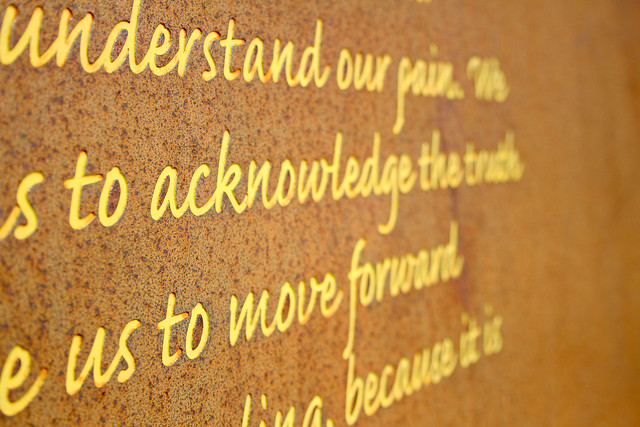 So, to Settler women, I say this: if you seek the liberation of Indigenous women then your task is not to occupy space, but to yield it. Don’t speak for Indigenous women, don’t tell our stories, don’t presume to know our joy or our pain. Instead, create the spaces for us to speak by challenging the many iterations of Settler privilege that result in our voices being unheard. Respect our lived experiences of intersectionality. And learn the practical tools that will enable you to recognise – and daily interrogate – your own privilege and that of the people and structures around you.

We are women. Indigenous Women, Women of Colour, and White Women. Trans and gender-diverse Women. Women with a disability. Women living in poverty. We are all a part of the greater beauty and complexity that is Women. And we, the life-bringers, the change-makers, are surely capable of creating spaces in which all Women can speak and be heard.

Ambelin Kwaymullina is the author/illustrator of multiple award-winning picture books, and author of the much-loved young adult dystopian series the Tribe. We are thrilled to be publishing her next YA novel, co-written with her brother Ezekiel Kwaymullina, Catching Teller Crow, which will be published in Australia and New Zealand later this year.

Ambelin blogs widely online with many thought-provoking articles, for example more on women speaking up, a guest post about being an ally of Indigenous writers on Justine Larbalestier’s blog, a reflection on Indigenous Futurisms and further insightful reading on the Wheeler Centre website.