With just a week until we publish Chris Hammer’s powerful new thriller Scrublands, find out what all the buzz is about as Chris introduces the book, while fellow crime authors Sarah Bailey, Dervla McTiernan, Mark Brandi and Michael Brissenden share their reviews. 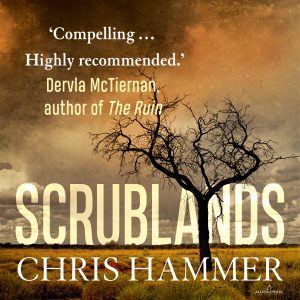 We’ve already shared our staff love for Scrublands, and that of some early readers from bookstores, but here’s what some of Australia’s top crime writers have to say about Chris Hammer’s debut novel:

A superbly drawn, utterly compelling evocation of a small town riven by a shocking crime.
Mark Brandi, author of Wimmera 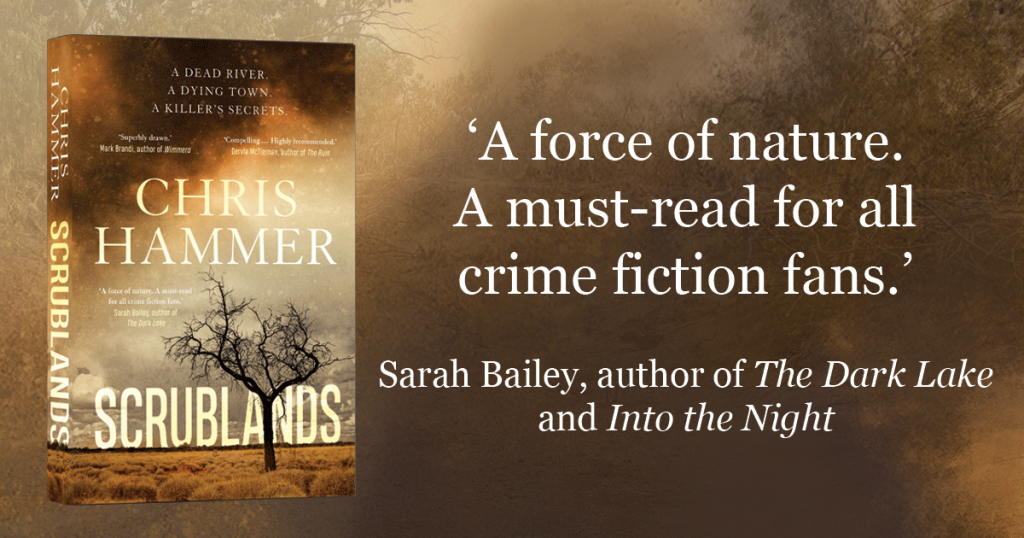 Scrublands kidnapped me for 48 hours. I was hopelessly lost in the scorching Australian landscape, disoriented but completely immersed in the town and people of Riversend, as the heat crackled off the pages. I was devastated when it was time to go back to the real world. This book is a force of nature. A must-read for all crime fiction fans.
Sarah Bailey, author of The Dark Lake & Into the Night

A brilliant read. A thriller that crackles and sweats and a powerful portrait of a small town on the edge.
Michael Brissenden, author of The List 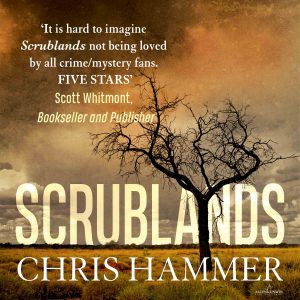 The rave reviews from booksellers have also continued, with this 5 star review in Books + Publishing from Scott Whitmont at Lindfield Bookshop:

In a dying Riverina town that’s suffering a merciless drought, ‘good people fight to retain honour and dignity against unfair odds’. Shockingly, one Sunday morning, the town’s priest opens fire and guns down five parishioners before being shot dead himself by local police. This gripping opening scene immediately hooks the reader. A year later, troubled journalist Martin Scarsden arrives for an investigative piece on how the residents of Riversend have coped with the tragedy. As Martin gets to know the various town characters—each with their own secrets—more shocking revelations about the shootings come to light and further crimes and mysteries are unearthed. How are they related, if at all? Increasingly, Martin finds himself personally entangled in the lives of those he’s covering. The complexities of the narrative and its characters are mind-boggling, but always presented cogently with impressive prose and brilliant plotting from debut author Chris Hammer, who has decades of experience as a journalist. This ‘why-dunnit’ (not ‘whodunnit’), is a remarkable study of human fallibility, guilt, remorse, hope and redemption. The descriptions of landscape are often evocative in the style of Tim Winton, with the parched country-town setting reminiscent of Jane Harper’s The Dry. Hammer is an author to watch. It is hard to imagine Scrublands not being loved by all crime and mystery fans.

Fellow journalists have also been captivated by Chris’ novel about a journalist unravelling the threads in a story about the secrets of a small country town:

Hammer’s portrait of a dying, drought-struck town numbed by a priest’s unimaginable act of violence will capture you from the first explosive page and refuse to let go until the last. His remarkable writing takes you inside lives twisted by secrets festering beneath the melting heat of the inland, the scrub beyond waiting to burst into flame.
Scrublands is the read of the year. Unforgettable.
Tony Wright, Associate Editor and Special Writer, The Age and Sydney Morning Herald

Brilliant and unsettling, Scrublands stands at the junction of Snowtown and Wake in Fright, that place where Australia’s mirage of bush tranquillity evaporates into our hidden fears.
Paul Daley, writer and journalist

A compulsively page-turning thriller where the parched interior looms as large as the characters.
Katharine Murphy, Guardian Australia

Read the opening chapters below, and find out why Scrublands is capturing readers from the first pages – plus you can win a signed copy: