Everyone wants to know how to cope with the end of the world right? Lili Wilkinson shares insights from her research into the world of doomsday prep & preppers, a key theme of her new novel After The Lights Go Out. 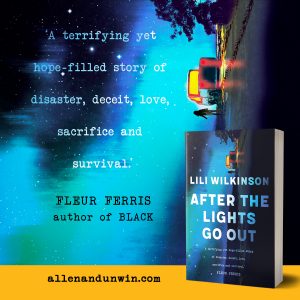 When I first came up with the idea for After the Lights Go Out, I wanted to see what other fiction there was about doomsday preppers. I read one particularly famous book, much beloved by the survivalist movement, set in a small town in the US. It was very masculine. All the women were described in relation to how attractive they were to the male protagonist. After the disaster happens, civilians are conducting public executions in the town square within three days. People are saying things like ‘By God, Jim. I thought we were men. I thought we were… Americans,’ and crying and singing the US national anthem. And I kept thinking – if this kind of disaster happened in Australia, I can guarantee nobody would be singing the national anthem. So I decided to write a book with a similar plot: a small town withstanding a massive nation-wide catastrophe – but where most of the characters were women, just quietly and sensibly getting shit done. 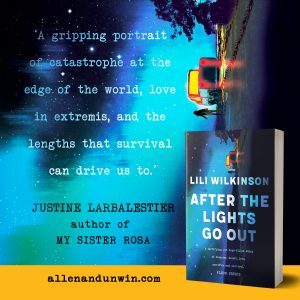 Of course it still needed some drama, so there is also betrayal and secrets and near-death experiences and survival. And kissing, because this is still a book by me. I wanted to tell personal stories – about being separated from friends and family, about being in a foreign country during a disaster, about falling in love. And about what to do if you get your period during the apocalypse, and your prepper father forgot to put any tampons in his survival bunker.

The book required a massive amount of research – about geology and flora and fauna. What all the parts of a zinc mine are called. How to build a radio from things lying around the house, without any electricity. How to purify water. Navigate by the stars. Build a fire. Use an epipen. Help someone having a seizure. Deliver a baby. Perform emergency dentistry. Find a Shakespeare quote relevant to any situation. Understand how the electrical grid works. Explain the effects of solar flares on radio waves. Plus I had to research the names of cars and guns and other stuff that is generally not my area of interest.

Some of the most rewarding research was talking to people – electricians, twins, people with an understanding of HIV, Christians, people from Puerto Rico, and many others. Although not all of this research ended up in the book, it expanded my horizons and my understanding of the world and my place in it.

I use Pinterest a lot when researching, to be able to quickly collect ideas, images and resources. It turns out that preppers really like Pinterest too. I was already following a lot of self-sufficiency pinners (I’m one of those unbearable veggie garden/chooks/sourdough/kimchi kind of hipsters), but things got really eccentric when I started following the hardcore preppers and suddenly my feed was peppered with underground bunker plans and sniper rifles. If Pru’s Dad is right and all our internet usage is being monitored by the government, then my Pinterest feed after writing this book is definitely going to land me on some kind of watchlist.

The thing that really intrigues me about the prepping movement is the way it exists in a moral grey area. The most hardcore of preppers believe their bunkers, supplies and skills must be kept secret, because when the inevitable collapse of society happens, nobody will be trustworthy and anyone who you let in on your secret will betray you and take your stuff. I kept coming back to this idea, over and over. Are you okay with watching your neighbours’ kids starve to death, while you have a bunker full of supplies? Is that the kind of world you want to survive in? To me it seems like such a pessimistic way to view the world – that community is only held together by a thin veneer of civilisation, and it could all fall apart at any minute. I really wanted to dig into this mindset, and see how it stood in opposition to my initial idea of a town full of mostly women just quietly and sensibly getting shit done. These warring mindsets are endlessly fascinating to me, and I hope they will be to others, too. 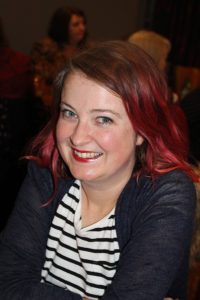 Lili Wilkinson is the award-winning author of eleven YA novels including The Boundless Sublime, Green Valentine, Pink and Scatterheart. After studying Creative Arts at the University of Melbourne, Lili established the insideadog.com.au website, the Inky Awards and the Inkys Creative Reading Prize at the Centre for Youth Literature, State Library of Victoria. She has a PhD in Creative Writing, and lives in Melbourne with her husband, son, dog and three chickens.

Read the opening of After The Lights Go Out