For International Women’s Day we asked some of our authors to write about this year’s theme Balance for Better, and here Mary-Rose MacColl looks at the challenges faced by women throughout the last century and using fiction to shine a light on the continued fight for equality and balance.

At the start of my novel The True Story of Maddie Bright, a young woman in desperate straits leaves a child at a foundling wheel in a church in central London in 1921. The novel is about the issues women have faced across the sweep of history, particularly when there are children involved.

Foundling wheels developed from the early baby hatches or baby boxes in the middle ages, which were basically a hole in a wall in a hospital or church home that enabled a person to leave a baby anonymously.

The foundling wheel was a drum-shaped cabinet on a pivot that operated like a revolving door. The people on the inside would be alerted to the baby arriving but wouldn’t see who left the baby on the outside.

These devices were popular throughout the nineteenth century and they have seen a resurgence in some countries in recent decades where governments or churches have decided they will reduce the number of babies abandoned. However they are designed, they are a mechanism where mostly mothers, typically in desperate situations, can leave their babies. To me, it’s so very sad.

Foundling wheels and the new baby hatches might be seen as a balanced policy approach to reduce infant mortality. In New South Wales in 2018, with a similar goal, Government passed legislation to enable the courts to permanently remove children from their mothers without consent so that the children can be adopted. Other states may follow. You can see how the then Minister Prue Goward arrived at this solution. Child protection is fraught, and long-term foster care far from ideal. We must stop harm to children. You might describe this solution as balanced.

But it’s not unlike what happened to thousands of Aboriginal mothers and babies across New South Wales and Australia throughout the twentieth century when they were stolen from their families. We use the word stolen because that’s what happened. These children were stolen and you can track the harm, like a radioactive bomb dropped in a family. People who were stolen have much worse health and life outcomes than those who weren’t, and those in their immediate families have poorer outcomes than families with no one stolen. The harm spreads outward from the centre of the blast. Even extended family members are affected.

What happened to the stolen generations also happened to non-indigenous mothers deemed unsuitable by state or church through much of the twentieth century. Their babies were taken away and adopted out, sometimes by physical force. For the mothers, it must have felt like leaving a baby in a foundling wheel or hatch, only worse because they had no agency.

The theme of this year’s International Women’s Day is Balance for Better, but is balance what’s needed in response to policies that take babies from mothers, in any of its meanings? There is something cleansing about the rage we’ve seen in the #MeToo movement for instance, which sought similar seismic shifts in consciousness, and #MeToo is anything but balanced. It has crossed the world like a cyclone, leaving damage in its wake randomly and at times a little giddily.

In the twenty-first century, across the world there are still church organisations and charities, as well as ministers of our governments, who are mired in the belief that if you take children from poor or traumatised mothers and give them more material comfort, you will erase their past. But you don’t erase their past. You just erase them from themselves. For some, finding the way home again will be a long and heartbreaking journey. Some will never return. We know that because research tells us. Just like the stolen generations of Aboriginal children, adoptees have higher rates of mental health challenges throughout their lives. It is not an easy life journey in the best of scenarios, and many face far from these best-case scenarios.

If instead, you help mothers overcome the difficulties they face, you provide them and their children with an opportunity to recognise their strengths and break a cycle of trauma, some of which was caused by forced adoption in the first place. When David Tune’s comprehensive 2016 review of the NSW Government’s child protection system recommended we do this, his report was buried and we wound up here, back with forced adoptions. 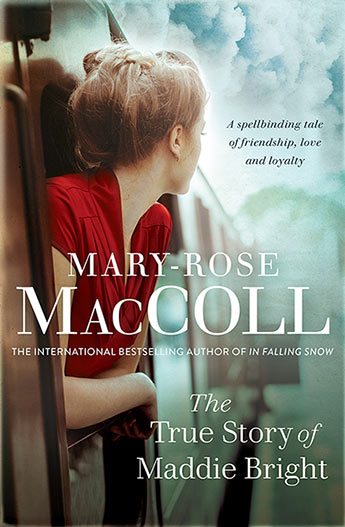 My new book The True Story of Maddie Bright is a novel, so doesn’t answer these life-transforming questions. It simply holds space for them to be investigated, as the characters – Maddie Bright, old and wise now, but young in 1920 when she gets a job on a royal tour of Australia by Edward, Prince of Wales; Helen Burns, a journalist and Edward’s press secretary who has faced terrible choices in her life; and Victoria Byrd, a journalist in modern times trying to negotiate changes in her profession and personal life – live on the page with joy and sadness and occasionally moments of deep resonance.

Balance for Better? Balance would be a world with strong families and no need for foundling wheels.

The True Story of Maddie Bright is Mary-Rose MacColl’s sixth novel. Her first novel, No Safe Place, was runner-up in the 1995 Australian/Vogel literary award and her first non-fiction book, The Birth Wars, was a finalist in the 2009 Walkley Awards. Her international bestseller, In Falling Snow, was published to great acclaim in 2012 in Australia and the US. Swimming Home, published in 2015, won the People’s Choice Award at the 2016 Queensland Literary Awards. MacColl’s memoir, For a Girl, was published in 2017 and was shortlisted in the Queensland Literary awards and the Victorian Premier’s Literary awards. She lives in Brisbane with her husband and son.